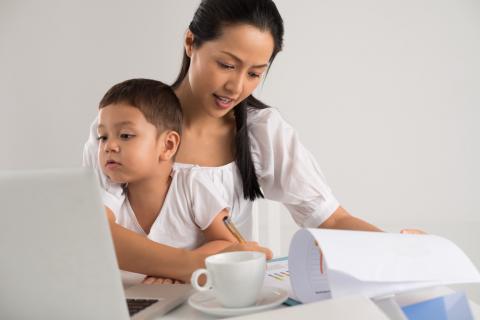 What does the employer mandate dispute have to do with moms?

A lot. A 2013 Pew Research study found that nearly half of all moms polled said, “that their ideal situation would be to work part time.”

This shouldn’t come as a surprise. When you add a 40-hour workweek to the demands of being a primary caregiver, the dual (triple? quadruple?) roles can leave you exhausted. And the reality is that for many parents, a 40-hour workweek just isn’t a legitimate option.

Some years ago I worked with an amazing mom who, because of the excellence of her work, was offered an increase in her hours by our company. But when asked, she told us she couldn’t work 40 hours a week even if she wanted to. As the parent of a special needs child, between bi-weekly (sometimes weekly) doctors’ appointments, therapy, specialized parent/teacher meetings, in addition to her regular parental responsibilities—there simply weren’t enough hours in the day to get it all done if she also worked a 40-hour week.

Luckily, this mom was able to work under 40 hours and still have access to health insurance through our employer, which was pivotal to the economic security of her family. Had that not been the case, it’s unlikely that we would have been able to benefit from her brilliant mind and unique skills that were essential to our work.

It’s moms like this that I think about when the employer mandate under the Affordable Care Act comes up.

Right now, the Senate is reviewing legislation that would change the healthcare law's “definition of full-time work from 30 hours to 40 hours a week.” The employer mandate, which went in effect January 1st of this year, requires businesses with over 50 employees to offer affordable health coverage that meets the minimum requirements of the law. If Congress votes to change the threshold, then companies will not be required to provide coverage to employees who work between 30 to 40 hours; a change that would impact parents like my former co-worker who work less hours to meet her family’s needs.

Not only would this impact moms and dads who work between 30 to 40 hours, but it may also impact full-time working parents.

Proponents of the change claim that forcing employers to provide health coverage to 30-hour employees will incentivize lowering hours to 29 or less, but the 30 hour threshold is actually intended as a protection within the employer mandate. In a recent NPR article, health policy expert Sherry Glied argues that more workers would be at risk of losing coverage if they change the definition:

"’Forty hours a week is kind of the standard amount of hours that people work,’ she says. ‘That's where the bulk of American employees are already working. So if you stick the threshold at 40 hours, it's much easier for employers, by just reducing hours by one [to 39 hours], to move a lot of people below the threshold.’" This means that changing the definition could put MANY more families at risk of having their hours cut and losing their benefits.

The potential negative backlash doesn’t end there. According to a nonpartisan report last year from the Congressional Budget Office, changing the threshold from 30 to 40 hours could increase the federal deficit by $74 billion, result in about one million people losing their employer based coverage, and increase the number of uninsured by up to 500,000. Proponents of the change are seeing opposition from both sides of the political spectrum, and it’s because it just doesn’t make sense.

The healthcare law may not be perfect, but it’s a start, and changing a core protection in the law isn’t going to help—especially at the expense of families and all of the workers who would be impacted by this change.

Would you or your family be affected by this legislation? Tell us about it in the comments below or by clicking here and we’ll make sure your voice is heard on this issue!