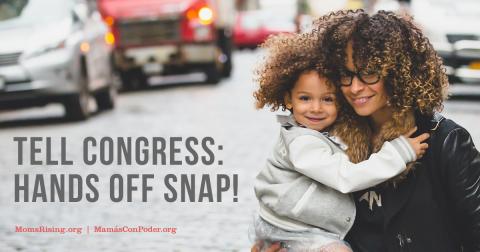 We need to keep the pressure on to protect SNAP!

You spoke out and your voices were heard! On May 18th, the destructive GOP Farm Bill failed to pass the U.S. House of Representatives! This bill included harmful and unnecessary changes to SNAP (food stamps) that would lead to more families struggling to put food on the table.

It’s because of your efforts that this horrible bill failed on the floor of the House. THANK YOU! Here’s just a little bit of what you andother moms, dads, and concerned people did to speak out to protect SNAP:

But the fight isn’t over.

The U.S. House GOP leadership just announced that they are going to hold a re-vote on their harmful Farm Bill in a few weeks and the U.S. Senate is planning to introduce their bill after Memorial Day.

We need to hold the line! We need to continue to speak out! We need YOU to keep up the effort to protect SNAP and our families.

***Sign our letter to the U.S. Congress now telling them to continue to keep their “Hands off SNAP!”

The U.S. House GOP Farm Bill makes dangerous and unnecessary changes to SNAP, which would affect millions of already struggling families. What does it do? The GOP proposal cuts billions of dollars from SNAP and results in 1 million low-income households, many with children, having less food. In addition, this unworkable, harmful, unnecessary, and woefully-underfunded bill takes SNAP benefits away from people 18-59 years old who aren’t currently employed or participating in training for 20 hours a week. (There are exemptions for parents of children under 6 years old and parents caring for an “incapacitated” child—but that is it!).

Rather than helping anyone keep a job or find a job, this proposal is designed to create massive red tape that will make it harder for millions of people to put food on the table, including parents raising kids, low-wage workers, and people temporarily between jobs.

This bill hurts our families and our economy. Economic analysis shows that there is a high return on investment, in fact, for SNAP because people immediately spend those funds on food in ways that also immediately fuel our consumer-driven economy. So the bill is bad for families and for the economy.

And in attempts to work out a deal and get more votes, rather than going back to the drawing board and proposing a bi-partisan Farm Bill that would boost up our families, farmers, our environment, and economy, chances are the Republican leadership will make even harsher changes to the SNAP program in order to win over more conservative members of Congress.

We’ve been winning by sharing our stories and raising our voices and we need you to do it again! We’ve won one battle to protect our families—we need to win the next one.

***SIGN our letter to the U.S. Congress telling them to protect our families and economy in the Farm Bill by continuing to reject harmful changes to SNAP.

We’ve had success in the past when we’ve banded together to speak out against harmful legislation. We did it when there were attempts to repeal the Affordable Care Act and make massive changes to Medicaid. By calling, signing letters, tweeting, sharing our stories, and literally showing up, we were able to protect the healthcare of our families.

We need to do the same thing with SNAP, which is such a vital program for millions of families that also lifts our economy. SNAP is a major lifeline to millions of families around the country. In fact, SNAP helps 1 in 8 Americans across the country afford groceries, including the 1 in 4 children who live in food insecure households. SNAP also lifts up families in communities across the U.S.: 36% of SNAP recipients are white, 25% are Black, 17% are Hispanic, and 3% are Asian. Families using SNAP live in every district in the United States, so our elected leaders have no excuse to not speak up for their very own constituents.

Join me in keeping up the pressure and telling Congress “Hands off SNAP!” SIGN OUR LETTER NOW!

Thank you for everything you have done so far to protect SNAP. After you take action, forward this blog to your friends and family and post the action link to Facebook so we can double down on our effort to protect SNAP.

Together we are a powerful voice for our families.

P.S. When you share your stories with MomsRising they make a huge impact! Just watch this video of D.C. mom Sandy sharing her story with Leader Nancy Pelosi.

P.P.S. Are you currently or have you ever used SNAP? How would an employment requirement affect you and your family? MomsRising wants to hear from you…your experiences with these programs matter! Share your story with us here.