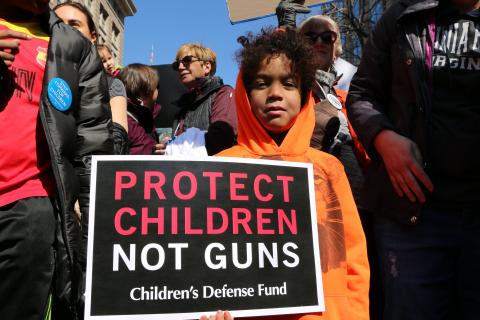 We Must Protect Our Children America!

Six years ago today, December 14 started off like an ordinary morning in classrooms across our country. Children rushed in to school bundled against the cold, chatting and laughing and trying to contain all of their extra energy and excitement from the bright holiday season. Concerts were scheduled, classroom parties were planned, and teachers were squeezing in their last few lessons before winter break. It was the same in Newtown, Connecticut—but that was the unforgettably horrible day 20 first graders and six adults walked into Sandy Hook Elementary School and never walked back out.

When he spoke two days later at a prayer vigil for the victims of the mass shooting at Sandy Hook, President Barack Obama said: “This is our first task — caring for our children. It’s our first job. If we don’t get that right, we don’t get anything right. That’s how, as a society, we will be judged. And by that measure, can we truly say, as a nation, that we are meeting our obligations? . . . . Can we say that we’re truly doing enough to give all the children of this country the chance they deserve to live out their lives in happiness and with purpose? Can we honestly say that we’re doing enough to keep our children — all of them — safe from harm?” President Obama said if we were honest with ourselves we knew the answer: no.

He continued: “Since I’ve been President, this is the fourth time we have come together to comfort a grieving community torn apart by a mass shooting. The fourth time we’ve hugged survivors. The fourth time we’ve consoled the families of victims. And in between, there have been an endless series of deadly shootings across the country, almost daily reports of victims, many of them children, in small towns and big cities all across America . . . We will be told that the causes of such violence are complex, and that is true. No single law — no set of laws can eliminate evil from the world, or prevent every senseless act of violence in our society. But that can’t be an excuse for inaction. Surely, we can do better than this. If there is even one step we can take to save another child, or another parent, or another town, from the grief that has visited Tucson, and Aurora, and Oak Creek, and Newtown, and communities from Columbine to Blacksburg before that — then surely we have an obligation to try.”

President Obama did try, but once again, as a nation we failed. We failed every person in America who has been injured and killed by guns since the massacre at Sandy Hook Elementary School including most heartbreakingly thousands of children. We failed the high school students murdered at Marjory Stoneman Douglass High School. We failed the toddlers, children, and teenagers among the worshipers killed at First Baptist Church in Sutherland Springs, Texas. And we’ve failed thousands of children killed in their homes and communities across our nation and the family members, classmates, and friends all of them left behind.

We failed Makiyah Wilson, the 10-year-old girl who was shot and killed in front of her Washington, D.C. home in July while trying to buy a treat from the ice cream truck. We failed seven-year-old Taylor Hayes, who died in Baltimore that same month after being shot while riding in the back seat of a car. And in a coincidence almost too terrible to be true, we failed Taylor’s five-year-old half-sister Amy Hayes, who was shot and injured on November 19 walking to buy juice at the corner store. Amy’s great-grandmother said that when she saw Amy fall to the ground she thought the young girl had tripped in her Pink Panther sneakers because she hasn’t learned how to tie her shoelaces very well yet.

We are still wantonly and sinfully continuing to fail every day in our duty to protect our children. According to the Children’s Defense Fund’s Parent and Child Trends survey conducted earlier this year by YouGov, children say they are more worried about a shooting happening in their schools than they are about fitting in with other children or experiencing peer pressure. Even children too young to be in kindergarten are at risk: more preschoolers are killed from guns each year than law enforcement officers in active duty. In 2017, 93 children under 5 were killed by guns. Between 1963 and 2017, 67,521 Black children and teens were killed by guns—nearly 17 times the number of recorded lynchings of Black people of all ages in the 74 years from 1877 to 1950. Have we no shame or sense of responsibility to place our children’s lives ahead of guns? But there is hope.

Since the massacre at Sandy Hook, growing numbers of people in America have been saying no more. Mothers and fathers and now children and teenagers themselves are demanding that we protect children, not guns. Even some gun owners are demanding action. Overall, about 6 in 10 American voters support stricter gun control and believe more guns will only make our nation less safe according to a recent Quinnipiac University National Poll conducted in November 2018. This is a critical opportunity for members of Congress and state legislators to move forward early in 2019 on essential common sense gun safety and ensure all children the right to grow up safely—free from fear and violence. With great urgency, we must:

As today’s students become the next generation of voters and leaders a new groundswell of powerful voices is starting to shout surely, we can do better than this to protect our children. We must do better for our children. This holy season is a very fitting time to begin.