"We handled all the stress of moving, only to find ourselves in a child care desert." 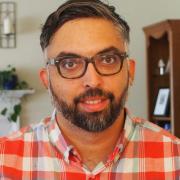 Rasheed Malik
Share This
Add your voice to the comments

No one actually enjoys moving, but it’s especially tough if you’ve got little kids. When you’re young and single, moving can even be a social affair – it’s famously easy to trick friends into lugging a futon, desk, or a few cardboard boxes up some stairs as long as there is the promise of free pizza or beer at the end of a hard day’s work. By and large, an interstate move as a family of four doesn’t work the same way.

I’m speaking from experience here, as last year my wife and I moved with our infant and four-year-old from Michigan to Washington, D.C. We’d gotten new jobs in the nation’s capital, and while we were excited to start a new chapter of our lives – finding a house where our kids would grow up and form lasting memories, getting to know a world-class city, taking our careers to the next level – mostly we were stressed out. From when we figured out we were definitely moving to our first day at work in DC would be a scant six weeks.

But, like you do in those situations, we told ourselves that we were going to get through it eventually. We made a list, and we dutifully checked off tasks as we got ready for moving day. There was the packing, of course, but then there was the logistics of car insurance and voter registration and the other trappings of adult life. Finally, there was everything that needed to be sorted out for the kids’ lives. The realization hit us like a ton of bricks: CHILD CARE. We would need to find a provider for an infant and a preschooler, hopefully near our house or on the way to and from work, with slots ready to be filled – and that was before we even got to the questions of affordability and quality.

My wife and I spent hours, then days, and then weeks, calling child care centers. We’d get through a whole conversation with the director or recruitment staff before finding out that they don’t offer infant care, or that they could take our four-year-old right away but there was a six-month waitlist for our six-month-old. Of course, maybe something will open up sooner, but they’ll only call you back with openings if you put in the $200 non-refundable application fee. We started to ponder just how much we might put up just to get in somewhere. Compromising on quality was not an option, but should we just drop $1000 or more on application fees in case something opens up? We wanted the kids to be in the same place, but could we handle dual drop-offs and pick-ups if that was the only option?

We were in a child care desert. I know this now, because in addition to being a father living the child care struggle, I’m also an early childhood policy researcher. I’ve had the opportunity to spend some time with problem in the months since our move. And let me tell you, our situation is not unique. While we did eventually find a child care provider that could accommodate an infant and a preschooler, the location was hardly convenient. Our commute involved driving halfway to our offices in DC, dropping the kids off, parking in a paid lot, walking to the Metro, and then riding the Metro into the city. It was less than ideal.

Besides the fact that half of Americans live in a child care desert, key findings from this survey of the child care market include:

Working families across the country deserve more quality choices when it comes to child care. Early childhood researchers, parents of young children, and child care providers have acknowledged the important role that quality child care plays in a child’s development. But without a healthy marketplace of child care options, many families have to make compromises, either in their ability to work or in their children’s early education.

One good place to start would be a substantial federal investment in child care and early education infrastructure just as it invests in public safety, public parks, and public schools. In the absence of such an investment, child care deserts will continue to stress out parents across the country. Just like we did during our move, these families will just grit their teeth while doing their best to make ends meet, all while trying to give their kids the best possible start in life. Don’t they deserve better?

Thankfully, some leaders in Washington are listening. Just this week, Senator Patty Murray and Rep. Bobby Scott introduced the Child Care for Working Families Act, which would ensure that families making less than 150 percent of their state’s median income do not pay more than seven percent of their income on child care. By investing in families and young children, we can build a healthier, more equitable, and stronger future for everyone.