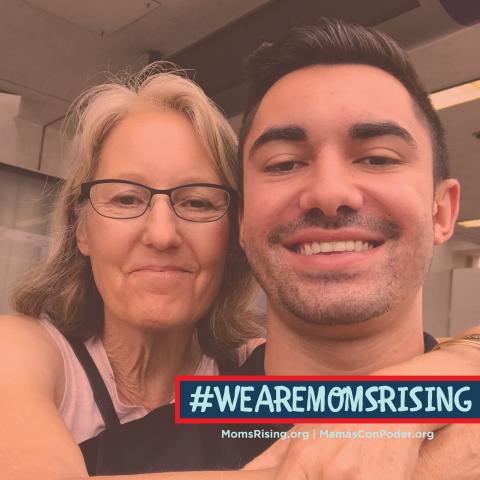 We Are MomsRising, Nina from Arizona

In today’s installment of We Are MomsRising, we talked to Nina in Arizona about how being able to access affordable health insurance (thanks to the Affordable Care Act/Obamacare!) helped her and her son. Read her story below. To learn more about the We Are MomsRising campaign, check out this blog post.

On a practical level, the ACA helped me financially to get rid of medical debt. On another level, just being able to continue to have health insurance and be able to provide my son with it and not have to worry about where the money was going to come from, helped me emotionally. It was such a worry, it was always there before, like I said it was such a worry.

During my time on an ACA [marketplace] plan, I knew I could get tests done that I needed. I was able to participate in the cost sharing part of the ACA, so my deductible was lower because my income was lower. That helped tremendously because even if you have insurance and your doctors says “We really think you need to get an endoscopy or a colonoscopy” or any other test you need to have when you get older, the deductible for that test could throw you back into debt. So [having a low deductible] really helped me get tests done that my doctor said I needed to get done.

People die without insurance. It is detrimental.

To be a good parent, I felt I had to have insurance for my son. I felt like I needed to provide that for him. There were times when he needed that insurance. He had a few scares where he had to have testing done. I can’t imagine what it would have been like to not have insurance and feel like I couldn’t take care of my son.

When [the ACA] started to be threatened, I knew I had to get involved. It has always been my philosophy that we are all in this together. That I’m not okay if you’re not okay. I can’t rest if others are suffering. I knew that I had limited energy so I decided to make this my issue because it was the one nearest and dearest to my heart.

I knew it wasn’t just important to my life but so many people's lives that I know and I knew were out there. For this to be taken away, it just seemed cruel, especially because there was no plan for what it would be replaced with. So I felt like I had to do something. As busy as I was, I had to do something around this issue. That was when I got involved in activism.

I’ve met so many people and heard their stories. Hearing how [the ACA]  impacted them,about what they would do if the ACA was taken away, that is what kept me going.