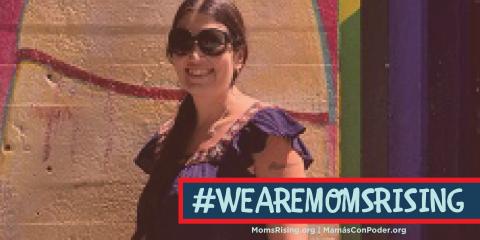 We Are MomsRising, Jade from California

In today’s installment of We Are MomsRising, we talked to Jade in California about the childcare struggle and her experiences as an immigrant. Read her story below. To learn more about the We Are MomsRising campaign, check out this blog post.

My partner Caesar is Mexican and I am British. It took about twelve years for me to get approved for a green card. And it only took that long because my mother became a citizen and sponsored me. If she hadn’t, I’d still be waiting for my green card.

A lot of my life was spent on waiting for this to happen. Most people don’t understand that it is not easy. It is a very difficult situation. For Caesar, it was a much different situation. He has struggled, especially now knowing what people say.

We lived in New York for some time and we were both working at restaurants and worked weird hours. When I got pregnant with our first, Luna, we were thinking that I would be able to go back to work after two months and that we could put her in either daycare or some kind of nanny situation. When we started looking into prices, we realized that what I made at work would come nowhere close to covering daycare or a nanny.

We weren’t really prepared for it.

We decided I would leave my job and become a stay-at-home mom. We didn’t really have a plan much further than that.

Caesar ended up getting another full time job to cover my lost wages. I became a freelance writer. This worked out well with one child but then we had another. New York was getting a little bit expensive at this point.

Around this time, my mother and sister had been living in California and they had offered to help with childcare so I could go back to work again. We moved across the country to a place where it wasn’t much cheaper. But my mom ended up moving back to England and my sister moved to France. We ended up being in the same situation, with another child in the mix, and away from our support network back in New York. In our new home, not many families around us looked like ours: immigrant parents from Mexico and England with U.S. born children. We tried to make it work.

Caesar still has two jobs. He struggles to find shifts that give him more than 39 hours a week at one job. He also struggles to find part time work that gives smaller shifts. So he ends up working 39 hours at one job and 32 hours at another each week. He is away from the house a lot because of it. He can find work easily but when it comes to getting promoted, he always gets passed by. It is stressful.

Affordable childcare would have been so helpful for us, even if it had been only a few hours each day.

I go to a lot of protests and actions and it is great to see people standing up and saying that they don’t want this happening and standing up for immigrants. I went to the Families Belong Together rally and it was so nice to see so many people there. That we aren’t alone. People understand and that makes me happy.