Washington, Are You Listening? Invest in Education with One Simple Change

Patrick Pylvainen grew up in a small town outside Minneapolis. The Minnesotan college student has seven siblings, so he borrows money for his tuition — Stafford loans from the federal government, plus loans from private banks that require interest payments while he's still in school. Now, those more affordable federal loans are in jeopardy.

The cascade of federal budget cuts expected to begin in January would slash every single program the government classifies as "discretionary," including funding for education. That's heartbreaking, since public investment in education was a driving force behind historic U.S. prosperity. And an advanced degree is Patrick's ticket to his dream job as a problem-solver in health care policy.

Secretary of Education Arne Duncan recently announced that looming budget cuts will pull funding from student loan programs. That will make it more difficult for students to get timely information about financial aid and could even prevent young people like Patrick from enrolling in college. And that's not all. Duncan said 1.8 million kids will be affected by reduced aid to disadvantaged public schools, while as many as 100,000 very young at-risk kids could lose access to early-childhood education through the Head Start program. These changes will be the law of the land if January's scheduled budget cuts are allowed to take effect. 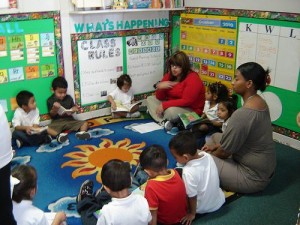 But this isn't how it has to be. Instead of slashing these programs, our lawmakers could simultaneously provide ample funding for education while reducing deficits. One of the most heated debates this election season is what to do about the Bush-era tax cuts, which are scheduled to expire at the end of the year. Those tax cuts aren't often mentioned in the same breath as education funding, but they should be.

That's because the Bush tax cuts siphon off money that could fund education and other crucial programs.

Consider this: In 2012, those in the top 1 percent will enjoy, on average, a $70,250 tax break. That's money that could go toward higher education, Head Start, and public schools across the nation. Lawmakers should let some or all of the Bush tax cuts expire to raise trillions of dollars over the next decade — and to prevent deep cuts to federally funded education.

Some lawmakers say we can't let the Bush tax cuts expire even for the super rich, arguing it would harm job creation. But level-headed research suggests that reverting to pre-Bush tax rates would have only very small effects on the behavior of those top earners. Meanwhile, the benefits of greater tax revenue — including higher graduation rates and a more skilled workforce — would far outweigh any losses.

Would most Americans get behind such a move? In a word, yes. There's strong support (62 percent) for increasing education funding, even in the context of budget deficits. And a recent Gallup poll found that six in 10 Americans believe wealthy taxpayers aren't paying their fair share. This is our chance to reduce deficits and invest in education for the long-term prosperity of the United States. Washington, are you listening?

Mattea Kramer is senior research analyst at National Priorities Project and the lead author of the new book A People's Guide to the Federal Budget.

This piece originally appeared on OtherWords.org.