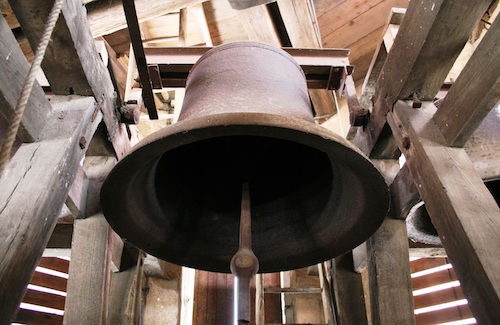 I recently got an email from a blog reader who said she had been obsessively reading and re-reading my first post, and all the comments that followed it. After years of managing what sounds like a challenging career and raising young children, she said she feared she was on the verge of a nervous breakdown. She wanted to know if I could see my own breakdown coming, and if so, what were the “warning bells”?

There were warning bells. I’ll tell you all about them, and perhaps more importantly, what I tried to do about them. They started almost as soon as I took a full-time job, when my daughter was 8 months old and my stepdaughter was still a toddler. They went right on ringing, on and off, for more than five years, until I quit.

Once, when I thought I was going to have to fire someone, I broke out in itchy red hives all over my body. Another time, I had a panic attack in the middle of a client meeting.

I was still getting used to being a parent, and I found the home-to-work-back-home routine grueling. We had no family in the area to help when one of us had to travel out of town for work or we just needed time to paint the kitchen. Normal people seemed to go about their lives fixing meals and mowing the lawn. We, on the other hand, seemed to be moving through mud, one child attached to each ankle.

And then there was the physical part. No one had warned us what a toll parenting takes on your body. The backaches from lugging children and all their stuff around, the twisting and contorting into strange positions to nurse and talk on the phone at the same time, or to stretch for a pacifier that has rolled under the couch, exactly out of arm’s reach. The illnesses. The sleep deprivation. I developed an eye twitch that went on for months. It felt like a little moth had taken up residence in my eyelid.

I became aware for the first time that my energy was a precious resource, and I had to conserve it. Every movement had to have a purpose. If I went upstairs to get my watch, I took an armload of toys with me. On the way down, I brought the basket of dirty laundry. Every action invoked at least one other action. I ate standing up while I made the kids’ dinner. I coordinated trips to the gym with a friend so I could have some much needed social connection and exercise at the same time.

Sometimes at night, I would lie in bed and feel the earth spinning under me, as if I’d just gotten off a carnival ride. I heard the bells, all right, and I knew for whom they were tolling.

The problem was, it was hard to believe that there was anything wrong with the way I was living. Wasn’t this what everybody did? Busyness was indeed expected, normalized.

Naturally, then, the problem had to be with me. I just needed to try harder.

I noticed that when I didn’t sleep enough, I was much more likely to get sick. If one of the girls was up at night, then there wasn’t much I could do. But if the kids were sleeping, it was inexcusable to lie awake. I took herbal sleep remedies for bad nights, and for really bad nights, I had sleeping pills. Brian and I alternated getting up with the kids on the weekend so we each had one day when we could sleep in until 8 or 9 am. I almost never drank alcohol because it made me wake up in the middle of the night. There was a 6 a.m. yoga class I tried to go to three times a week because, although it felt like a wild indulgence, it gave me more energy to deal with screaming kids and cranky clients and it helped me sleep. I quit coffee. That was not easy to do, quitting coffee. I had terrible headaches for a week, but once I adjusted to drinking tea it wasn’t so bad.

To make the most of our precious non-working time, Brian created an elaborate schedule for the weekends that carefully balanced “family time” and “alone time” for each of us. We had an alternate schedule for weekends when we didn’t have Martha.

Brian threw his back out a few times so badly he could barely walk. We both developed various forms of repetitive stress injury in our hands. When we were beyond exhausted, we would start silly arguments with each other that would last for days, until we no longer remembered why we were supposed to be mad.

In the equation of money versus time, we had money, but no amount of scheduling could resolve our lack of time. So, we used our money to buy time.

We hired Dinora to clean our house. We hired Thania to take care of Ruby during the day, and once a month she hosted a “date night” for all the families in her daycare, which Ruby never missed. We hired Jesús to mow the lawn and weed the garden. Many days, it seemed like the only thing keeping us going was the hard work of Latin American immigrants.

We did most of our own laundry, but we sent out Brian’s work shirts to be laundered, to avoid the ironing. We hired Ed to do our taxes. We hired an arborist to trim our trees. We hired a parade of IT people to climb up into our dusty attic and tinker with our wireless network, and each one of them ridiculed whoever had worked it on last. We had produce delivered to the house once a week, and if we remembered, we added bread and milk to the delivery to save a trip to the store.

Over the months, we learned endless ways to buy a little time with a little money:

We bought everything we could buy online—clothes, diapers, books, computer supplies. We kept to a strict 8 pm bedtime schedule for the kids, even if they didn’t seem tired, because there was so much that had to get done after they were in bed. After vowing I would never do this, we used the TV many mornings and evenings and sometimes on weekend afternoons when we needed to clean or pack up the car or just have a moment of peace.

We couldn’t afford for one of us to stop working, but we felt very lucky that we could afford the extra help.

How do families do it when both parents have to work fulltime and they’re still living paycheck to paycheck?

How do single parents do it?

We took elaborate measures to cope, money ran through our hands at an alarming rate, and still it wasn’t enough. When our coping strategies stopped working and we found ourselves teetering on the edge, we brought in the experts. We found a wonderful couple’s therapist and learned to stop taking our stress out on each other. I saw an acupuncturist when I developed a nerve problem in my hands, and I saw him again when I had a cough that wouldn’t go away. I found a naturopath who tested my saliva and prescribed Vitamin B shots and a complicated mix of amino acids and yet more herbs. Brian subjected himself to weekly allergy shots for months, and then a miracle happened. His allergies improved. He, too, started working out more, and his back pain finally subsided.

All these strategies, supplements, and support systems, all of our combined ingenuity, made it possible, just barely, for both of us to keep working full time. And then our son was born. And that is a story for another day.

What about you? How are you managing work and family? Have you heard any warning bells?

I Met With Chairwoman Cecilia Rouse to Talk About Paid Leave