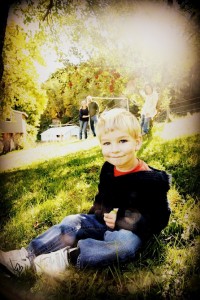 How the Affordable Care Act’s essential health benefits may help Henry get the health care he needs to grow and thrive.

Losing health care coverage just before your due date is not something you read about in “What to Expect When Expecting.”  Who would expect to lose their health insurance just when they needed it the most, but that is just what happened to a family from Plain, Wisconsin.  When other expectant parents were putting finishing touches on the nursery or picking up a few more diapers, Beth and Aaron Ferstl were grappling with news that Aaron had lost his job and with it, his family’s health insurance.

Aaron was laid off on January 16, 2009.  He and his wife assumed their family’s health insurance coverage purchased through his employer would cover them through the end of the month. Beth’s due date was less than a week away, so if all went smoothly, Beth and Aaron were hopeful their new baby would be born while they were still insured.

But life doesn’t always go as planned and their new baby came a couple of weeks after Beth’s due date.  They also received the shocking news that their health insurance coverage was cancelled the day Aaron lost his job. Under a federal law known as COBRA, workers who lose or leave their job are eligible to continue their coverage in their former employer’s health plan, as long as they pay the full premium. So with money from their savings and lots of help from family, Beth and Aaron scraped enough together to pay the high-cost COBRA premiums to continue their coverage.

Unfortunately, their bad luck did not end there.  Shortly after delivery, their newborn son Henry began seizing and stopped breathing. His doctors soon determined that Henry had suffered a stroke in utero, the result of a blood clot that lodged itself solidly in the left side of his brain. The stroke affected 85% of the left hemisphere of Henry’s brain and resulted in cerebral palsy that affects his ability to control the right side of his body.

After Henry’s birth, Beth and Aaron did all they could to make ends meet. While she wanted to spend time with her newborn, Beth couldn’t afford to take off any more time than her three weeks of vacation.   She had to get back to work to keep the paycheck coming.  Aaron stayed home with their newborn and their 4 year old, Charlotte, during the day, but started working nights so they could make ends meet.

The COBRA plan covered all they needed:  $89,000 in hospital bills – just for the first 5 days of Henry’s life — as well as the ongoing medical services Henry needed as a result of the stroke.  He also qualified for a public program that provides occupational, speech and physical therapy to children with disabilities from birth to age 3. The therapists and staff worked with Henry’s doctors to be sure he got all he needed.  “There was not a single thing that plan didn’t cover that 0 to 3 said he needed,” said Beth, referring to guidelines of care needed to help children meet developmental milestones during the critical first few years of life.

But under a new plan, Henry doesn’t always get the services he needs. After 12 months of COBRA, the Ferstls enrolled in Beth’s small employer plan during the annual open enrollment period. Their current small group plan, though, is not as comprehensive as their COBRA coverage from Aaron’s large employer. Plans available to small employers typically come with limits that large employer plans don’t have.  The new plan denied payment for $9,880 in bills despite collecting $6,000 in premiums from the Ferstls and another $14,000 from her employer. What was covered under their COBRA is not covered under the new plan, which excludes coverage for physical therapy (PT) and occupational therapy (OT) if they are needed because of developmental delays. Coverage under the new plan is limited to visits to the pediatrician and the cerebral palsy clinic, as well as a single therapy evaluation – but not the therapy visits that his doctor says he still needs. Thankfully, the early childhood education program he’s been enrolled in since he turned 3 provides some therapy, but it is not enough.

Insurers make a distinction between rehabilitative services, which are services that help restore function or skills, and habilitative services, which help patients develop function or skills they never had. For example, speech therapy for a child who hasn’t learned to speak at the expected age is a habilitative service. Helping someone relearn how to use their hand after an injury is a rehabilitative service.  The services themselves are usually not different; it’s the reason for the service that varies. Because Henry’s therapy needs are the result of a stroke in utero that prevented him from developing skills such as walking and talking as most children his age would – and not an injury that caused him to lose abilities he already had – his plan denied coverage for his therapy services.   Beth was told that they don’t cover therapies for developmental delays.

Such benefit limits are not uncommon in coverage sold in the small group market, where Beth’s employer must shop for coverage. But that may change under the Affordable Care Act (ACA). Beginning January 1, 2014, insurers who sell policies to individuals and small employers must meet new standards. The Essential Health Benefits (EHB) package is a minimum set of services that insurers must cover and includes 10 categories of services, such as hospitalization, prescription drugs, and preventive services.  The EHB also includes habilitative services, in addition to rehabilitative services, so there is reason to be hopeful that families like the Ferstls and the small employers they work for can buy a plan and be confident that it will cover a minimum set of services. EHB packages will be determined at the state level, and even though benefits packages must include habilitative services, states have leeway to decide how robust the coverage for these services must be. Advocates are asking that “habilitative” cover all services needed to keep, learn or improve a function.

Thanks to the early intervention, Henry is now 3 ½ years old and in many ways is like all other children his age. He can walk, dance, run, and ride a bike, and his balance is fine 90% of the time, says Beth. But his right hand is clenched and he gets frustrated that he can’t open it to put on his bike handle. And because he doesn’t have full use of his core muscles, he is prone to falling when he gets tired. So Henry has braces for his legs and a special splint for his hand, and has learned to walk with the help of visits to a special gait clinic that helps patients like Henry.

For Henry and his family, it doesn’t matter why he needs occupational or physical therapy; they just know he needs those therapy visits and their plan won’t cover them. Something that feels like an unfair, technical distinction can have a big impact on how he learns new skills and grows. And that has as much to do with how productive Henry can be as an adult as it does with whether or not he can grip both handlebars on his bike as a kid.

Few expectant parents are prepared to face the obstacles the Ferstl family encountered.  Instead of gracefully gliding from pregnancy all the way through the toddler years as described in the books, Aaron and Beth had to forge their own way trying to meet the needs of a child with severe medical and developmental challenges while dealing with unpredictable problems with their insurance coverage.   Their struggle continues, but they are hopeful that once the Affordable Care Act is fully in place in 2014, they will not have to worry as much about whether or not their son’s essential care will be covered by insurance.