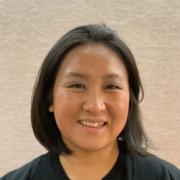 Sung Yeon is a first generation immigrant working mom who is passionate about building power to create change so her daughter can live in a more just world than the one she inherited.

Sung Yeon initially came to NAPAWF as it’s National Field Director with a vision to build infrastructure for building a robust base of community leaders who are most affected by the policy issues that NAPAWF works on, namely immigrant rights, economic justice, and reproductive right and health, using the reproductive justice framework.

Sung Yeon has continued to lead NAPAWF with the vision of building power with Asian Americanand Pacific Islander (AAPI) women and girls as she took on the role of Executive Director at NAPAWF.

Under Sung Yeon’s leadership, NAPAWF has gone from one organizer (her!) to now a team of nine on the organizing team.  Sung Yeon deeply believes that policies should be made by the people for the people and when people are equipped with tools to build power and create change, we will get the job done.

Before working at NAPAWF, Sung Yeon was the Director of Organizing at Interfaith Worker Justice (IWJ) leading collaborative work with
community organizations, unions and faith communities on worker organizing and worker justice public policy. Prior to IWJ, Sung Yeon was a Community Organizer at Asian American Institute where she helped organize the pan-Asian American community in Chicago to work together on presidential and mayoral elections, immigration reform, the state budget, and redistricting.

Sung Yeon was born in South Korea and spent her childhood in Singapore and India. Sung Yeon came to the U.S. at the age of 18 to study Political Science and Urban Studies at Wheaton College in Wheaton, IL and earned an M.Div from McCormick Theological Seminary in Chicago. Sung Yeon is an Ordained Minister in the Presbyterian Church(U.S.A.). Sung Yeon is a board member of the Hana Center, a Chicago based organization that builds power with Korean Americans, immigrants, and multi-racial communities for just policies that impact immigrant families.

October 7, 2019
Recently, the National Asian Pacific American Women’s Forum (NAPAWF) kicked off its Power Up Conference , a convening of more than 100 advocates from across the nation to help fuel the reproductive justice movement for Asian-American/Pacific Islander (AAPI) women and girls. Advocates will share tools and resources steeped in decades of grassroots organizing and policy advocacy and hear from speakers such as Virginia Delegate Kathy Tran. “In the wake of ongoing detrimental and inhumane policies that disproportionately impact women of color, NAPAWF’s Power Up Conference is centered around...
MomsRising Together