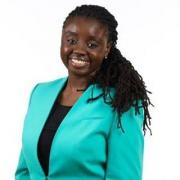 Rose Afriyie is the Executive Director of mRelief, an all-woman software development team that has built easy-to-use web and text messaging tools for families to find out whether they qualify for social services.
Rose's previous work experience includes being employed as a Marketing Associate for Google where she co-produced Oprah Winfrey’s first Google+ Hangout and President Obama’s Hangout where he conversed with citizens following the State of the Union. She also interned in the Domestic Policy Council of the White House during the passage of the Affordable Care Act. She holds a Master of Public Policy from the University of Michigan and BA from the University of Pittsburgh. Her professional qualifications also include literacy in code and prose. She has authored numerous columns and publications for TIME, Inc, Essence, Feministing.com, The Root.com, Uptown Magazine and several campus publications, and most recently at mRelief’s Blog on Medium “For The Public Benefit.” She is proficient in the computer programming language, Ruby and is a lifetime learner of computer programming languages that enable her to make things with code that decrease the digital divide.

Have FOMO this Tax Season: Cash in on Credits

March 11, 2016
There were 7 million of you out there, many of them moms, who recently missed out on the Earned Income Tax Credit. The EITC is a key opportunity during tax time for working Americans to infuse some cash into their households. For a filer with children -- this averaged to $3074 in 2013. Yet, year after year some get caught into the three main traps that prevent them from receiving important benefits that make a huge difference to a family’s bottom line. TOP 3 EXCUSES: I don’t know about the credit -- or perhaps whether I qualify? Missing out on the earned income tax credit means you can miss...
MomsRising Together