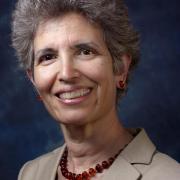 Executive Director of Center for Law and Social Policy, Inc.

Olivia Golden is CLASP's executive director. An expert in child and family programs at the federal, state, and local levels, she has a track record of delivering results for low-income children and families  in the nonprofit sector and at all levels of government. During the eight years she served as Commissioner for Children, Youth, and Families and then as Assistant Secretary for Children and Families at the U.S. Department of Health and Human Services (1993-2001), Ms. Golden was a key player in expanding and improving Head Start and creating Early Head Start, implementing landmark welfare reform, tripling the level of funding for child care, and doubling adoptions from foster care.

As an Institute fellow at the Urban Institute from 2008 to 2013, Ms. Golden spoke, wrote, and led major initiatives on poverty and the safety net, families' economic security and children's well-being.  She brings to CLASP the leadership role in a major multi-state initiative, Work Support Strategies, which provides six states with the opportunity to design, test, and implement reforms to improve low-income working families' access to health reform, nutrition assistance, and child care subsidies.

Under her leadership from 2001 to 2004, the D.C. Children and Family Services Agency emerged from federal court receivership and markedly improved the lives of children in the District.  Her book Reforming Child Welfare [2009] melds this experience with original research to recommend policy, practice, and leadership strategies to improve outcomes for very vulnerable children and their families.

During 2007, she oversaw the management of all state government agencies as New York's director of state operations. She was also director of programs and policy at the Children's Defense Fund (1991-1993), a lecturer in public policy at Harvard University's Kennedy School of Government at (1987-1991), and budget director of Massachusetts's Executive Office of Human Services (1983-1985). Her book, Poor Children and Welfare Reform [1992], draws lessons from welfare programs around the country that tried to make a difference to families by serving two generations, both parent and child.

Ms. Golden holds a doctorate and a master's degree in public policy from the Kennedy School of Government at Harvard, where she earned a B.A. in philosophy and government.

How the ACA Helps Low-Income Parents – and Children – Succeed

May 12, 2014
A few weeks ago, President Obama announced that 8 million people have signed up for health insurance through the Affordable Care Act’s (ACA) exchanges; 28 percent (about 2.2 million) were between ages 18 and 34. But also important for young adults is the opportunity to sign up for Medicaid, which provides health care for low-income people and, unlike the exchanges, does not have a deadline. Within this group is a large number of low-income parents—and the correspondingly large number of young children whose early life is shaped by these parents' caregiving. For example, a national sample of...
MomsRising Together