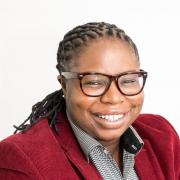 I am the Founder and Executive Director of New Voices for Reproductive Justice. I am a politico, I am DJ Dark & Stormy and a ginger beer lover. I am a native of West Philadelphia and I believe in the indefatigable spirit of Black women.

La'Tasha D. Mayes, MSPPM is a nationally recognized leader in the field of Reproductive Justice, Human Rights and leadership development for Black women and girls. La'Tasha is the Founder and Executive Director of New Voices for Reproductive Justice, a multi-state organization in Pennsylvania and Ohio dedicated to the health and well-being of Black women, femmes and girls headquartered in Pittsburgh with offices in Cleveland and Philadelphia.

New Voices advocates at the local, state and national level for Reproductive Justice - the Human Right of all people to control their bodies, sexuality, gender, work, reproduction and ability to form our families. New Voices celebrates its 14th anniversary this year having served 100,000+ Black women and girls, women of color and LGBTQ+ people of color through New Voices Pittsburgh, New Voices Cleveland and New Voices Philadelphia. In January 2015, New Voices co-launched the national policy initiative, In Our Own Voice: National Black Women's Reproductive Justice Agenda, as a founding partner.

La’Tasha is a graduate of the University of Pittsburgh with a Bachelor of Science in Business Administration and she earned a Master of Science in Public Policy and Management at the Heinz School of Carnegie Mellon University. La'Tasha serves on the Board of Directors of the Groundswell Fund - the largest funder of Reproductive Justice and women of color - and she was appointed to a second term on the Pennsylvania Governor's Advisory Commission on African American Affairs. La'Tasha is past National Board Chair of SisterSong Women of Color Reproductive Justice Collective - the largest Human Rights advocacy group for Indigenous women and women of color based in Atlanta.

In the Pennsylvania Primary Election 2015, La'Tasha ran for Pittsburgh City Council - District 7 and earned 35% of the vote against an incumbent in her first major campaign for elected public office. La'Tasha is a passionate Reproductive Justice activist, native of West Philadelphia and believes in the indefatigable spirit of women.

September 14, 2018
A woman is in labor — separated from her loved ones and shackled. She struggles against her restraints as she tries to follow the doctor’s instructions. Weighed down and on a short tether, she cannot position herself properly, let alone find any comfort. The pain of labor is intensified by degradation at the hands of her captor. It sounds like something out of a dystopian novel; far from fiction, it is the reality of far too many incarcerated women, across the country and right here in Ohio. In Ohio and several states, the shackling of incarcerated pregnant women is a common practice. That’s...
MomsRising Together