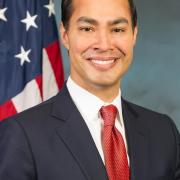 Julián Castro was sworn in as the 16th Secretary of the U.S. Department of Housing and Urban Development on July 28, 2014. In this role, Castro oversees 8,000 employees and a budget of $46 billion, using a performance-driven approach to achieve the Department's mission of expanding opportunity for all Americans. As Secretary, Castro's focus is ensuring that HUD is a transparent, efficient and effective champion for the people it serves. Before HUD, Castro served as Mayor of the City of San Antonio. During his tenure, he became known as a national leader in urban development.

A Victory for a Fairer Housing Market

October 9, 2014
When we hear that a mother is on maternity leave, most of us smile and realize it’s a special time in that family’s life. But what HUD has found is that often banks hear something else—they hear something that in a steady stream of cases has led lenders to deny, stall or question the home mortgage loans for expecting families.
MomsRising Together
Politics & Policy