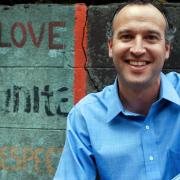 Jon Gould joined the staff of the Children's Alliance in 1997. As Deputy Director, he coordinates the organization's public policy, mobilization, lobbying, communications, and outreach activities.

Jon was born in Chicago, Illinois and raised in Chapel Hill, North Carolina. In 1989, he graduated from Cornell University with a BA in history. Shortly after, he moved to Seattle, where he began working as a community organizer with the Seattle Tenants Union. After being hooked by an experience as a guest trainer with the Children's Alliance, Jon accepted a staff position. Prior to becoming Deputy Director, Jon served as the organization's Community Action Director.

Jon has an extensive history of contribution and leadership in housing, human service, and children's issues at the local, state and national levels. His strategic leadership has contributed to major state policy victories for children, including Washington’s Apple Health for Kids universal health coverage program, major expansions in early learning including the Early Start Act, and expansions of child nutrition programs.

Jon has held board leadership positions in housing, human service, and political action organizations. He has received numerous professional awards, including the Change Agent of the Year award from Real Change Newspaper and the Community Partner of the Year award from SEIU Local 925. Jon has a Masters in Public Administration from the University of Washington's Evans School. In addition to his professional work at the Children’s Alliance, Jon is an Adjunct Professor at Seattle University where he teaches public policy advocacy.

Jon Gould is married to Tamara Dyer and they are parents of two sons, Aram and Ellis.

Progress on oral health care with #NativeHeroes in Washington state

November 30, 2015
“Alaska has seen great success in solving a native problem with a native solution. We want to export that success to our community, [with] a Swinomish provider serving the Swinomish community in a dental clinic built by the Tribe on our land.”
MomsRising Together