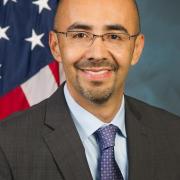 Gustavo Velasquez was nominated by President Obama and confirmed by the United States Senate to become Assistant Secretary for Fair Housing and Equal Opportunity at the U.S. Department of Housing and Urban Development.

Prior to his nomination, Velasquez was Executive Director of the Latino Economic Development Center (LEDC), a non-for-profit organization based in Washington, DC dedicated to serve thousands of Latinos and other immigrants and underserved populations gain the necessary skills and capital to start and maintain their own businesses. LEDC also advocates for and supports communities to secure affordable and accessible housing.

Prior to his tenure at LEDC, he served for seven (7) years as Director of the District of Columbia Office of Human Rights, where he led the enforcement provisions of the DC Human Right Act, considered one of the most comprehensive non-discrimination laws in the country. He also served between 2003 and 2007 as DC's Director of the Office of Latino Affairs. During his District government career, Velasquez ensured that the very comprehensive civil rights of residents, workers and visitors to the Nation's capital were protected and upheld according to the rule of law.

Before his mayoral appointments in the District of Columbia government, Velasquez was Director of Operations and Director of the Division of Families and Neighborhood Development at Congreso de Latinos Unidos, the leading social service provider to Latinos in Philadelphia. In this capacity, he managed large-scale programs in the areas of housing counseling, workforce development, and financial capability for the most vulnerable communities of Philadelphia and its surrounding area.

He has served in numerous boards and advisory groups at local and national levels, with an emphasis on civil rights and educational organizations, as well as issues for the advancement of Latinos in the United States. He attended the University of Pennsylvania where he graduated with a master's degree in government administration.

He lives in the District of Columbia with his wife, Emily, and his two children.

October 22, 2015
A home should be a refuge and a place of comfort. But for many women their landlords are a source of fear, demanding sexual favors along with rent money. This kind of sexual harassment isn’t often in the news cycle but it happens routinely, just below the radar, and it’s one of the subjects of a new rule from the U.S. Department of Housing and Urban Development (HUD) to protect the most vulnerable women from predatory landlords or others. Most of us know and have long recognized that the Fair Housing Act prohibits harassment in housing and housing-related transactions because of race, color,...
MomsRising Together