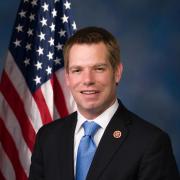 Congressman Eric Swalwell proudly represents California’s Fifteenth Congressional District, which includes a large portion of the East Bay.  In January 2015, he was sworn in for his second term in the U.S. House of Representatives, continuing his work to bring new energy, ideas, and a problem-solving spirit to Congress and advance policies that will support equality, opportunity, and security.

Congressman Swalwell serves on the House Permanent Select Committee on Intelligence, where he is the top Democrat on the Subcommittee on the CIA, and the Committee on Science, Space, and Technology.  In his first term two of his bills were signed into law, including the Philippines Charitable Giving Assistance Act, which encouraged Americans to contribute to the Philippines after Typhoon Haiyan.

He holds important leadership roles within the House Democratic Caucus, including serving as chair of the Future Forum, a group of young Democratic Members of Congress focused on issues and opportunities for millennial Americans. Keeping his promise to work across the aisle, he helped found the United Solutions Caucus, a bipartisan group he currently co-chairs.

Congressman Swalwell was raised in Dublin. He received his bachelors and law degrees from University of Maryland. He then returned to the East Bay to serve the cause of justice and protect victims as a prosecutor in the Alameda County District Attorney’s Office for seven years.  In addition, he was elected to the Dublin City Council in 2010.  He is the oldest of four boys and son to Eric Sr., a retired police officer, and Vicky, who works as a secretary.