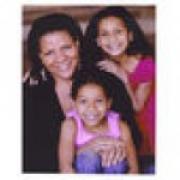 Dawn Comer Jefferson writes for television and film and is Sr. Editor at UCLA’s Bunche Center for African American Studies. She writes frequently on family and diversity issues for print and online media.

Dawn Comer Jefferson writes and produces for television and film. She is Sr. Editor at UCLA's Bunche Center for African American Studies and has also written for Fit Pregnancy, Working Mother and other magazines on diversity and family issues. She co-edited the parenting anthology, Three Ring Circus: How Real Couples Balance Marriage, Work, and Family (Seal Press 2004), and co-wrote the children's African American historical fiction, The Promise.

February 24, 2011
My seven year old got confused between the Civil War and the Civil Rights Movement. She kept insisting that her first grade teacher taught them about Martin Luther King, Jr. and all the work he did to help people during the Civil War. It was a hilarious conversation as I tried to explain the two different time periods and what went on during each. She looked at me blankly, almost sadly, feeling sorry that I didn't have my facts straight and continued to insist that King was a great leader during the Civil War. A friend of mine who teaches community college told me of a similar incident with...
MomsRising Together
Health Care Blog Carnivals

September 20, 2010
The health care bill passed six months ago. Many people are still angry. Some are making threats. Others fear this new law will take away their freedom instead of improving the quality of their lives. Anger, threats, fear…I understand those feelings and share them, but in a very different way. I am angry when I think of my twenty-three year old friend who died from kidney failure because he didn’t have health insurance and was no longer covered on his parents’ policy once he’d graduated from college. Even now, almost two decades later, I remember visiting him in the hospital room. He’d...
MomsRising Together

Activist in the Making

June 12, 2007
Activist in the Making A couple of days ago, my daughter left for school, just an average, six-year-old first-grader. She came home a political activist. Nicole and several kids were playing on the jungle gym after school, when one child was approached by a yard monitor and questioned. It turned out the child did not attend the school, but was playing with his friend who did. The child was informed that it was against the rules for children from other schools to be on the play structure and he was asked to come down. In response to that, some of the children, led by a militant third-grader, created a petition. They went around the school yard gathering signatures to give to the principal, requesting “fair and equal access” to the play structure for all children. When Nicole came home from school, she was bubbling over with excitement about the petition. She wasn’t even quite sure what a petition was, but she was certain it would right what she personally considered an egregious wrong.
MomsRising Together

April 13, 2007
Imus, I Must With everyone in the free world weighing in on the comments made by Don Imus, who on his radio show called the players on the mostly black Rutgers University women’s basketball team, “nappy-headed ho’s”, I felt I must have my say. As a woman with my own nappy hair and the mother of two girls with those naps Imus spoke of, I wanted to take this opportunity to commend the intolerance we have witnessed over the past week. Don Imus was fired yesterday from both CBS radio and MSNBC, swept away by a tsunami size wave of intolerance over his vitriolic comments. He was fired because we showed intolerance to thinking that confuses hatred with entertainment.
MomsRising Together

Is Motherhood Depressing? Yes...and No

March 31, 2007
A recent article in L.A. Parent Magazine ( www.laparent.com ) asked, Is Motherhood Depressing? The article’s title was meant to be provocative – questioning whether the mere act of being a mother – supposedly the world’s most rewarding (and yes, the real oldest) profession, could emotionally debilitate even the most well-balanced woman. In reality, the story was about the difficulties of parenting while dealing with a psychological disorder, profiling one woman’s struggle with clinical depression. It cited a study which suggests that a growing number of women and men are finding that child rearing has sent them into a Prozac dependency, needing daily medication to survive from school drop-off to bedtime and every dirty diaper-, temper tantrum- and homework-induced meltdown in between. My personal belief is whatever it takes to get through the day without blood being shed is, to quote my favorite ex-con Martha Stewart, “a good thing.” My husband recently received very sad news which brought the message home. He learned an acquaintance from college who was married, had kids and was depressed, killed herself and her children while her husband was away serving in Iraq. All this got me thinking about the many parents I know who are not saddled with lifetime depression issues or even survivors of postpartum depression, but who still wonder aloud and often, why they feel their lives as parents have left them so frustrated, sad and often angry. Is motherhood depressing? Maybe it is, yes, but for reasons that we can change.
MomsRising Together

February 3, 2007
Two days after Christmas, my neighbor Jill* called me, crying. Her husband had threatened her. She said verbal abuse had been going on for awhile, but now the threats had escalated. Jill had talked to a counselor and was planning to go to the shelter where they’d help her move out of state and go into hiding. She asked me to take her child for the day so she could pack before her husband got home from a business trip. Truth is, I hardly know Jill. Our children have had one playdate together and that’s it. I knew nothing about her family or her marital crisis. Jill apologized for “dumping” this on me, explaining that she didn’t have friends or family in the area, and that the only other person she called for help wasn’t home. Not wanting to walk into the middle of a dangerous domestic situation, I first made sure her husband was out of town and wouldn’t return until the next day. Then I agreed to come over and take her child until the evening. I brought the child back to my house, made breakfast and let the kids play. Later we went to the mall and I made them a picnic which we ate in the park. It was an ordinary, even boring day, which Jill’s kid loved. There was a normalcy about it which the child seemed to crave. When Jill came to pick her child up, the kid didn’t want to leave. I get it. I wouldn’t want to go back into that situation either. I gave Jill a hug and told her to keep herself and her child safe and I wished her the best of luck on her journey.
MomsRising Together

December 31, 2006
End of December is the time for making resolutions which more often than not are distant memories come the Super Bowl. This year, I’ve decided not to make specific resolutions to do this or not to do that. It’s too damaging to my ego when June comes around and those ten pounds I was going to lose is now fifteen. So, I’ve come up with some broader thoughts to chew on which might last long after the holidays have passed and found some books and websites to help on the journey.
MomsRising Together

November 22, 2006
I like to call the season from now until the end of the year, “The Months of Eating Dangerously.” In the next forty plus days, we will all be celebrating Thanksgiving, Hanukkah, Christmas, Kwanza and New Year’s. These are all wonderful holidays where we gather with friends and loved ones to rejoice in our family traditions and important religious observances. Each holiday is rich with meaning and also with rich food. We are faced with an onslaught of holiday eating. There are office parties, school parties, holiday open houses, snuggling up in front of the fireplace drinking the hot chocolate and eating the sugar cookies that were left for Santa. With all the hams, turkeys, latkes, egg nog and even the ubiquitous fruitcake, it’s no wonder the average person gains five to ten pounds over the holidays. This time of year is rough. My daughters have barely recovered from the Tootsie Pop and Hershey Kiss induced coma brought on by Halloween and we’re already making plans for the upcoming foodapolooza.
MomsRising Together

October 5, 2006
If you haven’t already noticed, for the most part, my postings are about food or eating or not eating—basically something involving the digestive system. And I’m not a cookbook author or even a hard-core chef. It’s just that when I was younger, I was told that one of the most intimate things you can do socially with another person is eat. It’s a concept that has stuck with me because it makes sense: Eating brings us together, fosters cooperation and encourages sharing—if not of food, then of emotional and intellectual expression. It is the reason why potlucks, block parties and school mixers are so popular. It is why the concept of the family dinner (or making sure you have at least one of the three daily meals together) is so important. And now experts are confirming what parents have assumed for years: that cooking together is as positive an experience for kids and parents as eating together.
MomsRising Together

Back To School Lunch Blues

September 11, 2006
Out of school for eight weeks, my daughters and their friends start saying things like, “I’m bored,” and asking hopefully, “When does school start again?” I didn’t feel that way as a kid. I wanted warm summer days to magically continue through November, skipping fall altogether and going straight to Christmas. Today, my quest for the endless summer continues and when stores start “Back To School” sales, I get anxious. It’s not my kids going back to school that bothers me; it’s having to pack school lunches again.
MomsRising Together

July 12, 2006
Childhood obesity is the fastest growing health concern today. According to The National Institute of Medicine, since the 1970s, obesity rates have doubled for preschoolers aged two to five and for teens ages twelve to nineteen. Elementary school kids have it worse, with their obesity rate having tripled. Blame it on junk food, fast food, t.v., computers, Gameboys and a culture that glorifies couch potatohood. But at the same time we are raising chubby children, anorexia is also on the rise.
MomsRising Together