"Trayvon Martin could have been me, 35 years ago." - Pres. Barack Obama

In the wake of the collective sadness and disappointment across the country when George Zimmerman was allowed to walk away free after killing 17 year-old Trayvon Martin, our President spoke as a parent and shared this heartfelt statement:

“When Trayvon Martin was first shot, I said that this could have been my son.”  ~ President Barack Obama

As parents, we know how vulnerable our children can be everyday. But while our children are among the most vulnerable, they also are among those who have the biggest potential to help move our nation toward a better future. In fact, history shows us that young people often dream of powerful solutions that we cannot yet imagine.

It's time to stand behind our children and young people.

Last week, after the Zimmerman verdict, young people across the country started gathering at the Florida State Capitol, camping out, urging Florida Governor Rick Scott to call a special session of the Florida legislature to address the issues at the center of the Trayvon Martin tragedy: "Stand your ground vigilantism, racial profiling, and a war on youth that paints us as criminals and funnels us out of schools and into jails." [1]

This group of young people are called the Dream Defenders.

*Now is the time to nurture change. Take a moment to donate $30 to send sleeping mats to the Dream Defenders: 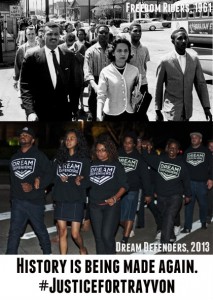 The audacious vision of young people has historically fueled powerful and important change in our nation. Equally, it has been the role of parents, educators, and caregivers to nurture, support, and protect our youth on their journeys.

Take for example, the 1961 Freedom Riders, a group of 300 young people from all over the country who took bold action against injustice and racism. These young people left the comfort and security of their homes and campuses to travel into the Deep South facing mob violence to stand against segregation--and to very publicly challenge polices that were inhumane and humiliating. Their bold actions helped lead to many major victories of the civil rights movement, including the removal of “whites only” signs and sections in interstate bus terminals. [2]

As the Freedom Riders endured mob attacks and police brutality, supportive community members who gave them smiles, meals, refuge and love, also surrounded them. Today, another generation of young people are coming forward to fight for the fair treatment for all families in our country: The Dream Defenders. [3]

*Support the next generation and defend the dream of our nation: Contribute $30 to send sleeping mats to the Dream Defenders camped out on the floors of the Florida State Capitol:

The Dream Defenders have been fighting for justice for Trayvon Martin since February of 2012, when George Zimmerman admittedly followed Trayvon Martin, against the instructions of authorities, and then killed the 17 year old. It took 45 days, weeks of protests by the Dream Defenders and others, and hundreds of thousands of letters from people like you before the Sanford, Florida police arrested Zimmerman.  Sadly, it only took 16 hours for jurors to acquit him of second degree murder and manslaughter.

We all were shocked with this verdict, especially given that "[m]anslaughter, which under Florida law is typically added as a lesser charge if either side requests it, was a lower bar. Jurors needed to decide only that Mr. Zimmerman put himself in a situation that culminated in Mr. Martin’s death."  ~ New York Times [4]

The appalling reality is that there are huge racial disparities within our criminal justice system. According to an Urban Institute study, when white shooters kill black victims, 34 percent of the resulting homicides are deemed justifiable, while only 3 percent of deaths are ruled justifiable when the shooter is black and the victim is white. [5]

It's time to stand against injustice.

*The Dream Defenders’ numbers are growing by the day as young people across the country gather in Florida. Click here to help purchase $30 sleeping mats to send to this new generation of youth calling for racial justice.

MomsRising.org stands with Sybrina Fulton (mother of Trayvon Martin) and all moms who have lost children to violence. We stand for advancing gun safety policies, for ending racial profiling, and for eliminating dangerous laws, like the "stand your ground" law in Florida.

We also stand with young people, like the Dream Defenders, who boldly fight for a better world.

The bravery and creativity of the 1961 Freedom Riders has been celebrated but rarely replicated. Today, we see another generation of young people emerging who won't back down in their stand for justice. The Dream Defenders are a part of a movement that has the potential to bring about powerful and positive changes in social and racial justice for all families in our country.

Let’s back them up!