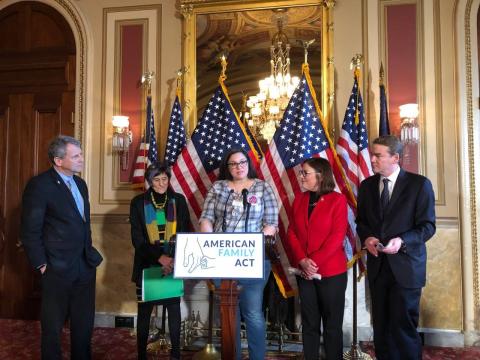 It's been another busy week, and we're ready for the weekend. But first: can you make sure to check off of our most urgent actions from this past week? From telling the Senate to stop Trump's power grab, to sharing your story about the importance of quality and affordable childcare, your voice is needed. And our top #5Actions list makes it easy for you to be heard! Just scroll down, take any actions you missed this week, and head into the weekend feeling like the star you are. (Be a super shining star by sharing this list with friends and family, too!)

Here are the top #5Actions from the past week =>

1. Call Your U.S. Senator NOW: The U.S. Senate is about to vote this week on whether to stop President Trump’s power grab

BACKGROUND: The U.S. Senate will vote any day on whether to stop President Trump’s misuse of national emergency powers to secure funding for his harmful wall. This unconstitutional power grab is a step toward unchecked authoritarianism and we need EVERYONE to speak out! Here's a reminder of what's going on: In a nonsensical tantrum, President Trump declared a fake national emergency in order to secure funding for his harmful wall after he failed to pressure Congress to give it to him. Our nation’s moms will not sit by as the President recklessly misuses emergency powers to waste our tax dollars and undermine our democracy. What’s the best way to stop a tantrum? Call in the MOMS!

Bonus action: Make sure you've signed our petition, too!

BACKGROUND: The United States should be a country that values families and the lives of pregnant women. Yet between December 2017 and April 2018, ICE has detained more than 500 pregnant women under policy directives from the Trump administration that removes protections for pregnant women in immigration detention. Last week, the Washington Post reported that a pregnant woman went into premature labor and delivered a stillborn baby while she was in custody at an ICE facility in Texas. This is inhumane and unacceptable! Demand Congress protect the basic human rights of women and children and ensure all immigrants are treated with compassion, dignity and respect!

3. Write a Letter to the Editor to Demand High-Quality, Affordable Childcare!

BACKGROUND: Families can’t afford to pay any more for childcare than they already do while early childhood professionals are already paid impossibly low wages. As a nation we can (and must) do better. Join us in writing a letter to the editor of your local paper to urge elected leaders to take BIG steps to ensuring all families have access to affordable, high-quality childcare by supporting the Child Care for Working Families Act! Members of Congress and their staff pay close attention to letters to the editor in local newspapers as a way to gauge the opinions of constituents. Your voice is needed to let your elected leaders know that families back in their home state are standing up, taking notice, and are expecting them to put an end to the childcare crisis by co-sponsoring the Child Care for Working Families Act – a comprehensive solution that would expand access to affordable, high-quality childcare for families while improving compensation and training for the childcare workforce

5. Help MomsRising Take our #GunSafety Fight to the U.S. Senate

BACKGROUND: Earlier this month, on the 25th anniversary of the landmark Brady Bill requiring background checks on some handgun sales, the U.S. House finally passed H.R. 8, legislation that would require background checks on virtually all gun sales. Recently, the House also voted to close the Charleston loophole, tightening existing background checks. But we still have a long way to go - these bills still need to make it through the rest of Congress. Can you chip in $5 to help us take this fight for gun safety to the U.S. Senate? Thank you!

MomsRising member Jessica traveled to DC from Pennsylvania (while 8 months pregnant!) to speak at the American Family Act introduction. This important piece of legislation would make key improvements to the Child Tax Credit helping more working families, especially those with young children under 6. Thank you Senator Michael Bennet, Senator Sherrod Brown, Representative Rosa DeLauro and Congresswoman Suzan DelBene for introducing this bill. And THANK YOU Jessica for sharing your story and being a super mom! Be sure to sign our letter calling on Congress to pass improvements to the Child Tax Credit!

Have a great weekend, and thank you for all you do!