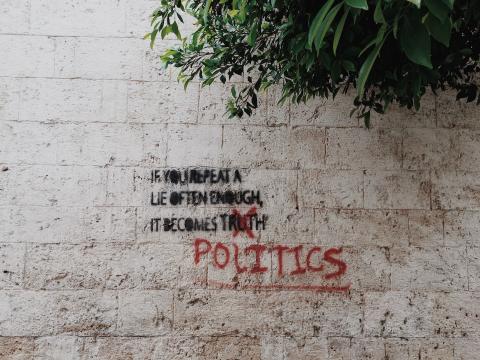 Photo by Brian Wertheim on Unsplash

Tips for Talking to Kids About Negative Political Ads

The closer we get to a major election, the more likely it is that political ads will hit below the belt. Negative political ads expose kids to highly partisan, sometimes inflammatory, and even frightening images. But because they're so extreme, it makes them ideal for analyzing the devices they use to sway voters.

Explain that ads contain political opinion. It isn't fact or fiction but a point of view. You may agree or disagree with it.

Ask how the ad conveys the candidate's position. Does it present her beliefs? Does it tear down the opposition? How does it use facts and statistics?

Talk about attack ads. Ask your kid how much he learned about the sponsor of an attack ad. Ads that attack a political opponent can backfire because they make the person behind the ad seem defensive, desperate, or afraid to discuss her own record.

Point out how ads are like little movies. Ask kids what kinds of lighting, sound, music, facts, or images the ad creators used to get their points across.

Dissect ads. Visit PBS's 30-second candidate to help kids understand the entire political-ad lifespan. Kids can discover the history of political ads and the tricks of the trade, and they can build their own ads to learn how experts manipulate images and facts to make a very partisan point.

Explain your own political thoughts. Tell them what you like about the candidates you favor. Explain the history of certain political issues to give context to the ads they're seeing.

See whether your kids can figure out who paid for the ad and why. The sponsors of political ads must be listed.

Check the facts. Dig a little deeper into the numbers flying by on the screen. Do they seem legit? Visit FactCheck.org to verify or ascertain the facts.

Note the images used in the ad. Pictures of the World Trade Center, footage of hardened criminals, and portraits of babies, endangered environments, and endangered animals are used as emotional shorthand. They produce positive or negative feelings simply by association.