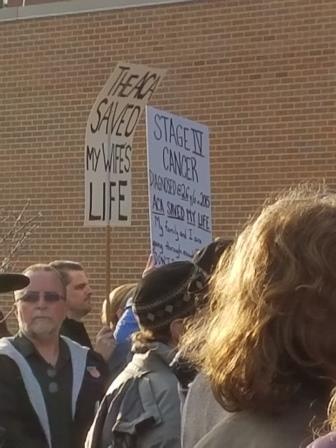 The line of cars snaking into the parking lots at Bowie State University was the first clue that on January 15 people in Maryland were determined to stand and fight against the repeal of the Affordable Care Act. They were responding to calls from members of Congress, organized labor and activist organizations to attend events held in many locations nationwide. Here in Maryland, well over 1,000 people overflowed the student center ballroom into other rooms and in a crowd outside the building. Maryland’s new Senator Chris Van Hollen, House Minority Whip Steny Hoyer (D-MD), and Maryland Reps. John Delaney, John Sarbanes, Jamie Raskin, and Anthony Brown attended the event, along with individuals who told how the Affordable Care Act had saved or improved their lives.

In the crowd there were signs like “The ACA keeps my wife (or husband) alive.” A man named Kevin said he had told his story to Speaker Paul Ryan and Senate Majority Leader Mitch McConnell, and shared it with us: he was unemployed and uninsured when the ACA passed. A navigator helped him sign up in about a half-hour. Soon after, he was injured in a hit-and-run car accident, followed by a diagnosis of multiple myeloma. Because of the care made possible by his insurance, he is “alive and feeling good.” “Taking away medical care is no way to make America great again,” Kevin reminded us.

Senator Van Hollen compared repeal of the Affordable Care Act without a specific and adequate plan to replace it to blowing up your house because it needs repairs, with the promise that you’ll get another house eventually. I added that to my collection of ACA metaphors: Repeal without a replacement plan is like being pushed off a building and maybe somebody will catch you on the way down; it’s like standing on a crumbling ledge. But hearing from people whose lives are at stake makes this very real, not just metaphor.

What do we refuse to go back to? A physician spoke about a 28 year-old man with a severe heart condition. She tried but failed to save his life in an emergency room before the ACA was enacted. Insurance would not cover this man. He had to choose between paying thousands of dollars for treatment he needed and paying for rent and food to care for his family, including two young daughters. He chose his family; without the care he needed, his heart stopped and the emergency response could not save him. The Affordable Care Act ended lifetime coverage limits and exclusion from insurance because of pre-existing conditions. The physician was passionate in not wanting to lose any more patients because they could not get the care they needed.

Most of the Maryland congressional delegation is strongly against repeal. So what’s the point of overflow crowds at Bowie State? Senator Van Hollen urged all of us to contact everyone we know in states where the senators need convincing. If every Democratic and Independent senator holds firm, another three Republican Senators would be enough to defeat repeal and bad replacement plans. Senators Collins (R-ME) and Heller (R-NV) voted for an amendment to the just-passed budget resolution that would have prevented cuts to Medicare and Medicaid. That amendment needed 60 votes to pass, so it failed, even though the vote for it was 49 to 47. The repeal legislation that’s expected by the end of this month will be able to pass with a simple majority. If they really do try to pass repeal with no replacement in sight, will Senators Collins and Heller join with others in a bipartisan effort to prevent that? And will a bipartisan majority insist that people like the 28 year-old man will no longer have to choose between preserving his life and supporting his family?

The willingness of so many people in Maryland and nationwide to stand for “Care, not Chaos” is heartening. Their vocal presence on January 15 and in the coming weeks and months will keep the pressure up. Public opinion has already led to President-elect Trump and a number of lawmakers to shift to a call for repeal and the replacement plan to be enacted together. If that holds, we will soon see a plan. Its proponents will say it will cover everyone and be better than what we have now. This will be the test of our advocacy. Can we work together to figure out whether the claims are true or false, and, if false, be unrelenting in reaching out nationwide to fight a repeal-and-not-really-replace plan? Will we be just as tenacious in fighting for the low-income people who need Medicaid? Can we spread the word to fight the devil in the details?

Lots of questions – but the signs from the participation in the January 15 events are very promising.