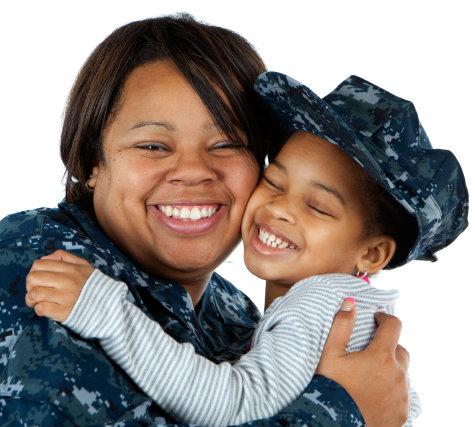 This weekend doesn’t just mark the official start of summer, BBQ season, and sunny days. It’s also a weekend when we remember our nation’s families who that have sacrificed the most for our country.

It’s also the time of year when we see a lot of members of Congress wearing flag pins and expressing support of the troops.

Congress must stand up for the families of the brave women and men serving in the military, as well as for veteran families.

**Honor military families by signing on to our letter to Congress TODAY and ask them to support, protect, and strengthen the Earned Income Tax Credit (EITC) and Child Tax! http://action.momsrising.org/sign/MemorialDay/

What do taxes have to do with supporting our troops? A whole lot! More than 63 million families, including 1 in 4 current or former armed forces families with children, make ends meet and avoid falling into poverty by using the EITC and Child Tax Credit. This extra money helps our families make ends meet throughout the year and pay for things that otherwise might be unaffordable like a car to get to work, a place to live, shoes for our kids, and other necessities. And by making those purchases we are funneling money back into our local economy, which sorely needs it. In short, these policies boost our families and our economy.

In short, military and veteran moms and families are boosted by the EITC and Child Tax Credit in our state. Moms like Lynda who writes, “We used the EITC and Child Tax Credit when my husband was serving in the United States Air Force and after he left the military and we were both working full-time jobs in the civilian job market. It helped us make ends meet and we were extremely grateful that these tax credits were available to us. Eliminating these tax credits would hurt so many hardworking people and their families.”

*Take a moment now to honor military families by signing on to our letter to Congress TODAY and ask them to support, protect, and strengthen the EITC and Child Tax Credit! http://action.momsrising.org/sign/MemorialDay/

Your voice matters! By writing Congress TODAY and supporting military families, you are also boosting all families and the economy! That’s a win-win! On average 9.4 million people were lifted out of poverty by the EITC and Child Tax Credit, including 5 million children. That's a big deal!

*In honor of Memorial Day, send a quick message to Congress to tell them to boost military families and the U.S. economy by supporting and strengthening the EITC and Child Tax Credit: http://action.momsrising.org/sign/MemorialDay/

Taking action today over Memorial Day Weekend is a big deal—and is one way you can thank those who serve our country. In fact, unless the U.S. Congress acts soon, key provisions of the EITC and Child Tax Credit will expire, pushing nearly 16 million people—including 8 million children and many military families—into poverty and making it harder for tens of millions more families to pay their bills. We can’t allow this to happen!

Your voice is needed to shine a bright light on the importance of these programs to members of Congress—and the more of us who speak up, who sign on, and who take action, the bigger the impact we’ll have together shoring up support for the EITC and Child Tax Credit, which are both anti-poverty programs that have had bi-partisan support over the years. (Even President Ronald Reagan said the EITC is “the best antipoverty, the best pro-family, the best job creation measure to come out of Congress.”).

These programs also have been shown to improve children’s health and education outcomes, including college attendance. That’s some powerful stuff!

Will you write your U.S. members of Congress this Memorial Day Weekend and ask them to support military and veteran families by supporting, protecting, and strengthening the EITC and Child Tax Credit? http://action.momsrising.org/sign/MemorialDay/

Together we are a strong voice for military families—and for all families in our nation.

P.P.S. The EITC and the Child Tax Credit often gets lost in the mix when Congress is more focused on tax breaks for the wealthy. We need to double down on our efforts this Memorial Day and make sure the voices of real people are heard loud and clear. So, can you post our action link to Facebook and tell your friends why you are supporting the EITC and Child Tax Credit today?