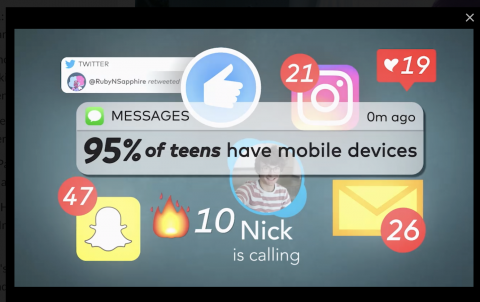 In Common Sense Media's latest research, teens dish on everything from cyberbullying to digital distraction and share good news about how social media makes them feel.

This Is What Teens REALLY Think About Their Social Media Lives

What teenagers look like they're doing and what they're actually doing can be two totally different things -- especially when it comes to social media. A bored-looking ninth-grader could be majorly bonding with her new BFF on Snapchat. A 10th-grade gamer may complain loudly when you cut off his internet but be secretly relieved. An awkward eighth-grader may be YouTube's hottest star. To find out what's really going on in teens' social media lives, Common Sense Media polled more than 1,100 13- to 17-year-olds in its latest research, Social Media, Social Life: Teens Reveal Their Experiences. The new study updates our 2012 study on teens and social media with surprising new findings that address many of parents' most pressing concerns about issues such as cyberbullying, depression, and even the popularity of Facebook (spoiler alert: It's not).

Why now? Today, 89 percent of teens have their own smartphones (compared with 41 percent in 2012). They grew up right alongside Instagram and Snapchat. They do research papers on Google Classroom, find emotional support on teen forums, share poetry on Tumblr, and are more likely to text "I love you" before they'd ever say it to your face. But concerns over the negative consequences of social media have grown in tandem with its popularity among teens. Grim reports on teen suicide, addiction, cyberbullying, and eroding social skills have caused many people, from parents to teachers to the tech industry itself, to look at social media as a potential contributor -- if not the cause -- of these issues. This survey clarifies some of those concerns and draws attention to the reasons some kids are deeply affected by -- and connected to -- their digital worlds. Here are some of the key findings from the report, what they mean for you and your teen, and what you can do about them.

They can't stop. They won't stop. Seventy percent of teens use social media more than once a day (compared to 34 percent in 2012). Interestingly, most teens think technology companies manipulate users to spend more time on their devices. Many of them also think that social media distracts them and and their friends.

Managing devices is hit or miss. Many turn off, silence, or put away their phones at key times such as when going to sleep, having meals with people, visiting family, or doing homework. But many others do not: A significant number of teens say they "hardly ever" or "never" silence or put away their devices.

Snapchat and Instagram are where it's at. In 2012 Facebook utterly dominated social networking use among teens. Today, only 15 percent say it's their main site (when one 16-year-old girl was asked in a focus group who she communicates with on Facebook, she replied, "My grandparents").

Less talking, more texting. In 2012, about half of all teens still said their favorite way to communicate with friends was in person; today less than a third say so. But more than half of all teens say that social media takes them away from personal relationships and distracts them from paying attention to the people they're with.

Vulnerable teens need extra support. Social media is significantly more important in the lives of vulnerable teens (those who rate themselves low on a social-emotional well-being scale). This group is more likely to say they've had a variety of negative responses to social media (such as feeling bad about themselves when nobody comments on or likes their posts). But they're also more likely to say that social media has a positive rather than a negative effect on them.

Exposure to hate speech in on the rise, while cyberbullying is less common. Only 13 percent of teens report ever being cyberbullied. But nearly two-thirds say they often or sometimes come across racist, sexist, homophobic, or religious-based hate content in social media.

Express yourself!  More than one in four teens says social media is "extremely" or "very" important to them for expressing themselves creatively.