The Visible Groundswell: March on Washington for Gun Control

We all knew there was a toxic strain of gun culture in American society, a love of guns beyond reason and uncompromising in its advocacy of firearms for all. We all knew, but occupied by families and work, and distracted by other worries like healthcare or the economy, we could and did pretend that the proliferation of guns, inevitably leading to gun violence, had nothing to do with us. What happened in places like Colombine, Blacksburg, Tuscon... Those happened elsewhere in America, not close to home in our own immediate communities.

Then came the shootings in Newtown, CT, on Dec. 14.  Newtown changed everything. Mothers, fathers, grandparents, aunts, uncles... we saw the faces of the children in our lives reflected in those of the 20 first graders who died at Sandy Hook Elementary School that day, and woke up to the fact that the Sandy Hook children could so easily have been our own. Our eyes were opened. It became impossible to ignore guns. It became impossible to allow the rhetoric and agenda of the gun lobby to go unchallenged, and to not try to DO SOMETHING to help make our children and communities safer.

The feeling that Sandy Hook must not ever happen again is a sentiment made up of equal parts tears, anger and cold determination, and it is fueling a groundswell for change. Nowhere was the growing groundswell so palpable as today, at the March on Washington for Gun Control. My 11-year-old and I found ourselves in a peaceful, even cheerful, crowd of thousands, comprising people from all generations and all walks of life. We marched from the Reflecting Pool in front of the Capitol Building, down Constitution Avenue, to the base of the Washington Monument. There we rallied. We remembered and mourned all gun violence victims and called for commonsense solutions, including universal background checks, a ban on military-grade assault weapons and high-capacity magazines, and stronger gun trafficking laws. As one of the speakers, DC Representative Eleanor Holmes Norton, said: "Only an outraged public can end the gun violence that has enveloped our country...We the people who did not act before, we the people this time will step forward...And this time we will not step back."

Here are some pictures of our amazing experience today. 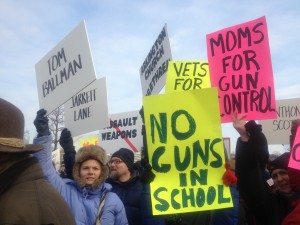 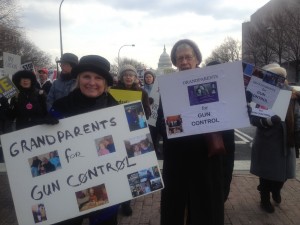 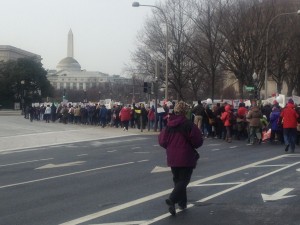 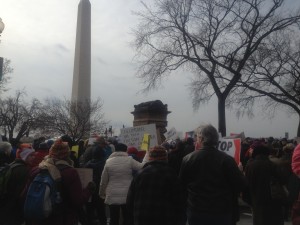 Arriving at the rally. 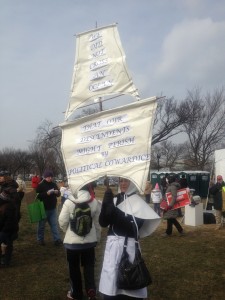 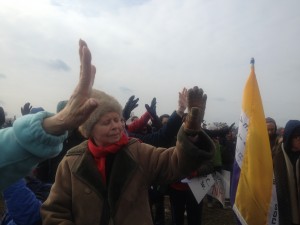 Raising our hands to the White House, and then to Congress. 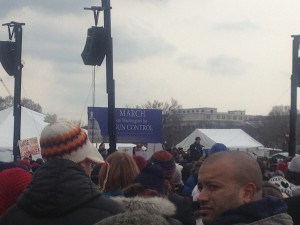