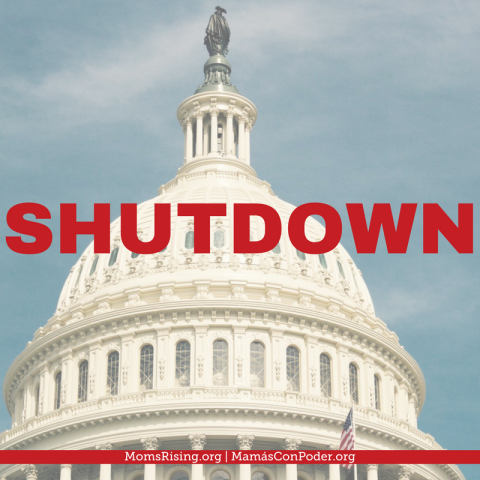 The U.S. Senate can reopen the government. TAKE ACTION!

“My husband and I are both contractors who support NASA at the Kennedy Space Center. I have called all my creditors and doctors and explained the situation. I have cancelled ALL my appointments and only pay what is necessary (electric, water, insurance for my vehicle, health care for my 9 year old son and mortgage). I do not leave my house unless necessary and sit and watch the news. I will be the breadwinner soon with my last paycheck coming in a few days. I am at my wit's end. I cannot even get my medication that I need due to the cost. I am afraid of what is coming and what is going to happen when there is no more money coming in. I want to go back to work!"- J from Florida

“My husband works for the IRS and is currently furloughed. He misses his first paycheck tomorrow and we don’t know when his next will be. We have a newborn who just turned three months and will be starting daycare soon which will cost us an extra $900 a month. If the shutdown continues I don’t know how long we will be able to sustain off of one paycheck. “- K from Colorado

These are the stories of just two of the 800,000+ federal workers who have been suffering for the past month since President Trump shut down the government over his political tantrum over a wasteful and unnecessary wall.

We have been hearing from families impacted by the #TrumpShutdown for weeks now. But we need to make sure that our elected officials, especially the U.S. Senate, are hearing these stories as well!

Some 800,000 people in the federal workforce are impacted by the Trump shutdown, including low-wage workers. That does not include contractors - janitors, food service workers, security guards, technicians, and others - who have lost their income and will not get back pay when the government reopens, but still need to find ways to pay for childcare, housing, food, and medicine, and in other ways support their families.

Shuttering the government over a manufactured crisis at the border has created an actual crisis in the lives of hard-working American families with children. Denying pay to some 800,000 federal workers creates a set of impossible choices, especially for families with children. For instance, many federal workers must continue paying for childcare that they cannot even utilize until the government reopens. Federal workers are not the only people impacted by this shutdown. The Food and Drug Administration (FDA) has only just now resumed “high-risk” food inspections and is delaying other routine inspections in order to preserve carry-over funding—which can only last another five weeks. Federally-funded domestic violence programs may begin scaling back services if there is no breakthrough in the FY2019 funding negotiations in the very near future.

The truth is that there is no emergency, no security crisis at the border, and, in fact, unauthorized border crossings have been declining for nearly two decades. More specifically, in 2017, long after President Trump started demanding his wall, border-crossing apprehensions were at their lowest point since 1971.

The U.S. Senate could take action right now if they wanted to take steps to reopen the government. Republican Senate Leader Mitch McConnell just needs to schedule a vote on the funding bill that the Senate drafted and the House already passed, which would fund those agencies that have been shutdown. This action would send a strong message to the President that this nonsense is over and we need to go back to a functioning government.

U.S. Senators will be home this week for recess. We want to flood our local newspapers with Letters to the Editors NOW so our U.S. Senators know that they have support to stand up against President Trump’s wall and shutdown.

***Join us in sending a Letter to the Editor to your newspaper now and help us stand up for the thousands of families impacted by the #TrumpShutdown!!

Sending a Letter to the Editor to your local newspaper is a highly visible way of speaking out.

Each day the shutdown continues brings severe consequences for America’s families and its economy. The economic ripple effects of the government shutdown are massive. The revised estimates from the Council of Economic Advisers show that the shutdown is beginning to have real economic consequences. The 2013 shutdown, which lasted 16 days, cost our economy $2-$6 billion in lost output.

Shuttering the government over a manufactured crisis at the border has created an actual crisis in the lives of hard-working American families with children. Unauthorized border crossings are at historic lows, down over 75% since 2000. President Trump is manufacturing a crisis just to seem as if he is delivering on the empty promises he made on the campaign trail.

America’s families cannot afford this shutdown, and we cannot afford to have our tax dollars—which should be used to improve our schools, childcare, and health care— be used for a wasteful wall.

Congress must do the right thing for families by immediately voting on a funding bill that will reopen the government.

Just click the link to send a Letter to the Editor to your local paper and stand up for federal workers and their families!

After you send your letter to your local paper, please forward this email to five of your friends and post our action link to Facebook. The more people that speak out and the more letters we get published, the stronger our voice will be! We need to let our members of Congress know that the time has come to stand up against President Trump’s border wall antics!

Thank you for sending a letter, speaking out, and being a strong voice for our families!

Take Action!
Write A Letter to the Editor on the #TrumpShutdown! Here's How