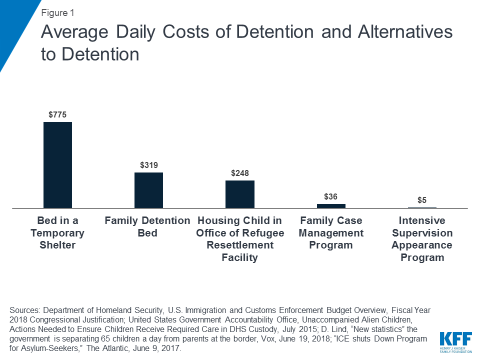 The unacceptably high cost of jailing children and families seeking safety in the U.S.

The Trump Administration has started to reunite children torn from their parents at the border, partly complying with a judge’s order. Fifty-eight out of 103 children under the age of five have been returned to their parents. Thousands of children five and older must be reunited with their parents by July 26, and a list of these children is supposed to be provided to the ACLU today. The Administration wants to detain many of these families together while their cases are adjudicated.

The American Academy of Pediatrics, Children’s HealthWatch and other experts have cited evidence that detention harms children. The toxic stress of piling trauma upon trauma on children, as summarized by the Kaiser Family Foundation, results in ”…high levels of psychiatric distress, including depression and post-traumatic stress, among detained asylum seekers, even after short detention periods, and that symptoms worsen over time.” Parents are subject to such harms as well.

These are the highest costs of the Trump Administration’s shameful punishment of those fleeing violence. But there are other dollar costs that underscore how unnecessarily bad their approach is. Kaiser Family Foundation shows the comparative costs of setting up internment camps ($775 per day), other forms of detention, as opposed to the very successful Family Case Management Program ($36 a day) and release into the community with ankle monitors (under $5 a day). We’ve previously written about how the Family Case Management Program achieved 99 percent compliance with court dates.

When a policy is seriously harmful, inhumane, unlawful, and costly, what does it say about an Administration and its allies in Congress that keep insisting on it?