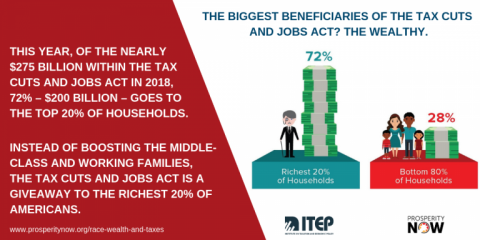 The spin begins: basic needs programs are blamed for increasing the deficit, when tax cuts are really at fault

When the 2017 $1.9 trillion in tax cuts were enacted, many of us predicted that the hole in the budget caused by the lost revenue would be used by the Trump Administration and some in Congress to justify cuts in basic needs programs like Medicaid, Medicare, housing, and SNAP.

And we were right:  the Treasury Department just put out year-end figures showing an increase in the deficit (up $113 billion over the previous year), and OMB Director Mick Mulvaney and Senator Majority Leader Mitch McConnell both said that the way to reduce deficits was to cut spending, with nary a peep about the tax cuts’ impact.

But here’s the truth:  as a nation, we have obligations to meet the health care and other needs of low- and moderate-income people and retirees. When we expand Medicaid, dramatically reducing the number of people without health insurance, that’s good news. More people are well enough to work and fewer people face bankruptcy from medical debt: that helps the larger economy. Yes, it costs money, just as baby boomers retiring leads to increased Social Security costs. Knowing that we have these obligations should cause us to make sure that our revenue streams stay adequate.

Our leaders instead passed a giant tax cut. As a result, in the year-end balance sheet, we see revenues increasing less than one percent in the past year, and dropping from 17.2 percent as a share of the economy (GDP) in FY 2017 to 16.5 percent in FY 2018. Corporate tax revenues declined by nearly one-third (an eye-popping 31 percent drop, especially in a strong economy) over the year. If corporate revenues had stayed level, most of the increase in the deficit would have been wiped out.

Federal spending did rise last year, by about 3 percent overall, which is relatively modest (as a share of the economy, federal spending actually dropped, from 20.7 percent to 20.3 percent). Pentagon spending went up 6 percent, an area where savings are really possible. Some basic needs programs saw spending decreases: SNAP/food stamps outlays dropped by more than $1.6 billion (down 2.3 percent).  Combined Social Security, Medicaid and Medicare costs were up 4 percent, a pretty modest increase considering the growing numbers of retirees and people newly eligible for Medicaid because of expansion in many states.

Majority Leader McConnell told Bloomberg News “I think it’s pretty safe to say that entitlement changes, which is the real driver of the debt by any objective standard, may well be difficult if not impossible to achieve when you have unified government.” He was unsurprisingly mum about the role of the tax cuts. And while party leadership usually calls for unified control of House, Senate, and the presidency, he now has pivoted in an apparent attempt to shirk blame for the deficit’s increase.

OMB Director Mulvaney also sought to use the deficit to call for spending cuts: “This fiscal picture is a blunt warning to Congress of the dire consequences of irresponsible and unnecessary spending,” as quoted by NPR.

No – the fiscal picture is a blunt warning that the tax cuts, with their huge disproportionate benefits to the wealthiest Americans and corporations, are unaffordable and profoundly unfair. According to the Institute on Taxation and Economic Policy, in 2018 the lowest-income households (earning less than $23,000) got an average tax benefit of $90, or 25 cents a day. Middle-income households (with incomes of $40,000 – $110,000) got $1,000, or $2.75 a day. The richest one percent (over $590,000) got $47,650, or $130.55 a day. Siphoning revenues out of the Treasury to further enrich the already rich will make it harder to pay for Medicaid, Medicare, and Social Security (as well as housing, education, and all the other domestic needs). That matters quite a bit to the people averaging a few dollars or a lot less every day from the tax cuts. The top one percent? Their wealth grows, widening the already gaping inequality.  And the disparities are even worse by race/ethnicity. Whites in the top one percent averaged a $52,400 tax break in 2018.  Blacks and Latinos in the top one percent averaged less than $20,000 (and in the bottom group received $90 or $110, respectively).

Millions of Americans need health insurance, Social Security, education, and protections from economic and other disasters beyond their control. Our leaders, having transferred trillions of tax cut dollars overwhelmingly to the rich, now want to tell us these necessities are “irresponsible and unnecessary spending.”  Nope – that would be the tax cuts.