Each year at Halloween, our neighborhoods are bustling as children go door to door dressed as zombies, vampires, skeletons or something else fantastic and scary. For many children Halloween is the rare occasion to indulge in a fun time of ghost stories and goblins and trick or treats. But at the end of the night they put away their costumes and make-believe in their closets and return to their normal lives.

Sadly, too many children do not have normal or safe or protected lives and their monsters are real. They do not have closets in many homeless shelters or on the streets or church steps where they sometimes live with homeless parents. They are not safe in drug and violence infested neighborhoods and suffer chronic hunger especially on weekends and during long summer months when school is out.

It should not and does not have to be this way! It is shameful that children are the poorest group in America because of unjust political choices and skewed values that help the wealthiest and powerful at the expense of poor and voiceless children. As you decide which candidate will win your vote, consider this:

The latest poverty statistics show 14.7 million poor children in America; 6.5 million in extreme poverty – a slight improvement but far from enough. Our goal must be to end child poverty in America and the misery it breeds now. It is unacceptable that:

The monsters these children face are not acts of God but the results of our unjust choices as a nation. We must work together to wrestle the monsters of poverty, homelessness, hunger, and gun violence to the ground.

As a country, we cannot hope to build a strong competitive future if we continue to allow millions of children to grow up poor and without the health care and education and other supports those of us who are more privileged enjoy.

Below is a deeply moving poem by my friend Ina Hughs that reflects the angst of poverty for children far better than I can. Please stand with children when you vote next week so together we can defeat the real monsters and end child poverty in America in our lifetime.

A Prayer for Children© (By Ina J. Hughs) 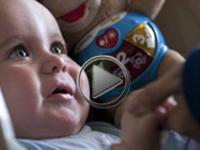 We pray for children
who put chocolate fingers everywhere,
who like to be tickled,
who stomp in puddles and ruin their new pants,
who sneak Popsicles before supper,
who erase holes in math workbooks,
who can never find their shoes.

And we pray for those
who stare at photographers from behind barbed wire,
who’ve never squeaked across the floor in new sneakers,
who never “counted potatoes,”
who are born in places we wouldn't be caught dead,
who never go to the circus,
who live in an X-rated world.

We pray for children
who bring us sticky kisses and fistfuls of dandelions,
who sleep with the dog and bury goldfish,
who hug us in a hurry and forget their lunch money,
who cover themselves with Band-aids and sing off key,
who squeeze toothpaste all over the sink,
who slurp their soup.

And we pray for those
who never get dessert,
who watch their parents watch them die,
who have no safe blanket to drag behind,
who can't find any bread to steal,
who don't have any rooms to clean up,
whose pictures aren't on anybody's dresser,
whose monsters are real.

We pray for children
who spend all their allowance before Tuesday,
who throw tantrums in the grocery store and pick at their food,
who like ghost stories,
who shove dirty clothes under their bed and never rinse out the tub,
who get visits from the tooth fairy,
who don't like to be kissed in front of the carpool,
who squirm in church and scream in the phone,
whose tears we sometimes laugh at and
whose smile can make us cry.

And we pray for those
whose nightmares come in the daytime,
who will eat anything,
who have never seen a dentist,
who aren't spoiled by anybody,
who go to bed hungry and
cry themselves to sleep,
who live and move, but have no being.

Offer your hand and voice and vote to children left behind and reject any and all political leaders who seek to win and hold office for their own betterment rather than protecting and investing in children – all of the children – God has entrusted to our care.