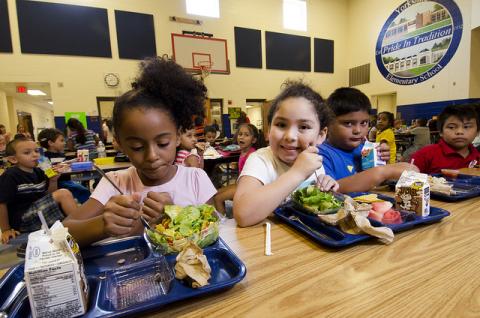 Clint Mitchell is an elementary school principal in Prince William County, Virginia. He doesn’t like to test students at the end of the month. Why? Because their families are running out of food by then – their SNAP benefits don’t last the whole month. I heard him at a White House Conversation on Child Hunger in America on Wednesday, January 27. When his students come to school hungry, they are tired, irritable, and can’t focus on their schoolwork. They get in trouble. If he can arrange it, Principal Mitchell would rather conduct standardized tests no later than the middle of the month. (And research bears out his experience – performance on standardized tests tends to go down by the end of the month, and rises after SNAP benefits are received again.)

The impact of inadequate food budgets? In other research cited by the Obama Administration’s Council of Economic Advisers, there’s a drop in caloric intake among SNAP recipients ranging from 10 to 25 percent from the beginning to the end of the month. Hospital admissions for low blood sugar among low-income adults rise 27 percent by the end of each month. By the end of the month, the rate that schoolchildren get disciplined goes up 11 percent.

Clint Mitchell was worried last Friday when the schools were closed because of snow. On Fridays, his school hands out backpacks filled with food to their needy students, so they don’t go without over the weekend. How would their families manage?

And even tougher than not having enough food to get through the weekend is going the whole summer without access to school breakfasts and lunches. Close to 22 million children get free or reduced price school lunches; only about 3 million participate in summer food programs. So the Obama Administration proposes to expand successful summer pilot programs in which families get debit cards to allow them to purchase food to make up for the lost school meals. Evaluations of the pilot programs found that they “prevented very low food security among children, the most severe form of food insecurity, by one third.” To allow more children to benefit, the Administration’s new budget will include $12 billion over 10 years for a permanent Summer Electronic Benefits Transfer for Children program, open to all families with children eligible for free or reduced price school meals.

The Administration will propose it on February 9, when it releases its FY 2017 budget. But Congress will have to approve the program. What with all the bipartisan interest in reducing poverty, this evidence-based program ought to find widespread support. Right? Legislation to reauthorize child nutrition programs is before Congress right now. Advocates fought hard for an expansion of summer food programs, and they succeeded in the bill that recently emerged in the Senate. But the version of Summer EBT in the bill is much more modest than the President’s new proposal; it will serve far fewer children. (See the Food and Research Action Center (FRAC)’s analysis of the bill.) So we’ll see how many children will be helped – and how many will be left out – as Congress finishes the child nutrition legislation and takes up the budget.

Another good nutrition idea that will be in the President’s budget: letting states use Medicaid data to automatically certify children as eligible for free or reduced price school meals. Families qualifying for Medicaid that have school-age children have incomes low enough to qualify for free or low cost school meals. Why make them jump through the extra hoop of submitting their income documentation again? No good reason – the Administration plans to work with five states initially to test this approach, and, looking beyond the Obama presidency, hopes 20 states will use Medicaid data to smooth enrollment in school meals programs over the next three years.

We started with the evidence that SNAP does not provide enough benefits to last the month, and the lack of enough food shows up in school and health problems. So in addition to these very valuable expansions of other nutrition programs, we should be increasing SNAP benefits. At minimum, we should undo SNAP cuts that Congress approved a few years ago. That’s something the President should propose, and Congress should rush to fund. We’ll find out what the President does about this on February 9. As for Congress: last year’s budget resolution, jointly adopted by House and Senate, proposed slashing low-income mandatory programs in the income security category by at least $350 billion over 10 years, according to a Center on Budget and Policy Priorities analysis. The budget resolution never specified how much would come from SNAP. But it’s hard to imagine it wouldn’t have been a pretty big chunk. We’ll see what happens soon.

This post was originally published on the Coalition on Human Needs' blog, Voices for Human Needs. To recieve posts like this in your inbox, subcribe to CHN's blog today.