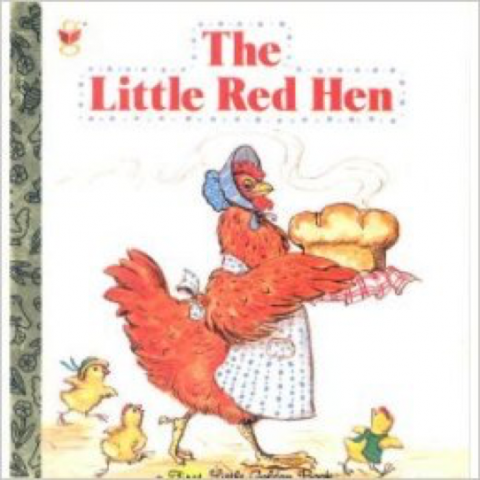 I value self-reliance. In fact, my favorite book as a young child was “The Little Red Hen,” with the chorus, “I’ll do it myself,” said the Little Red Hen. “And so she did”. In the story, the Little Red Hen asks for help from the other barnyard animals each step of the way in harvesting ingredients and ultimately baking a delicious loaf of bread. She receives no help from the other animals who are childlike in the way they stand by and watch her do her work, hopeful that they will receive the fruits of her labor.

When my kids were small and I would prepare meals for them as they steadily watched and then would clean up afterwards as they busied themselves with suddenly urgent homework, I would think to myself, “I am the Little Red Hen!”, although I would inevitably share my freshly baked treats with my family, knowing that much of my reward was watching them enjoy. Indeed, I have always found the Little Red Hen’s work ethic, sense of purpose, and efficiency inspiring.

But let’s assume the Little Red Hen is not a timeless folklore character, but a single mother in the United States, and that the Little (or Big?) Red Rooster is no longer on the scene.  In this case, despite her level of productivity, the Little Red Hen’s labors would be classified as unpaid caregiving and thus valued at zero. Furthermore, the Little Red Hen would be shut out of the Social Security retirement system.

Under current program rules, Social Security covers caregivers only indirectly through spouse and survivor benefits, otherwise known as auxiliary benefits. Through auxiliary benefits, the spouse of a retired worker is eligible to receive 50 percent of the retired worker’s primary insurance amount (PIA). Individuals who are eligible for benefits based on their own work history and their spouse’s work history are dually entitled and would receive their benefit plus the difference between that amount and their spousal benefit. Divorced individuals are also entitled to spousal benefits as long as they were married to an insured worker for at least 10 years and remain unmarried. In our example, the industrious Little Red Hen’s work was unpaid and so she is not an insured worker. She is also an unmarried mother, like more than a third of mother today in the United States today (Pew Research Center Report) and so not entitled to auxiliary benefits. So unless the Little Red Hen marries the Red Rooster or leaves her chicks and productive work around the home to seek employment, she is destined to join the growing number (currently 29% according to the Economic Policy Institute) of never married women over age 65 who live in poverty. In fact, as a whole, women 65 or older experience poverty rates almost twice that of men in the same age group.

Social Security is crucial to economic security in retirement. Yet, current rules were written for an age gone by where women’s primary role was to be a spouse and caregivers were covered through a patriarchal system of auxiliary benefits. This made sense in the era of Franklin D Roosevelt when Social Security was first enacted, but seems out of sync with current demographic trends of fewer marriages and a waning traditional family structure.

This is why we need to rally support around The Social Security Caregiver Credit Act of 2016. Introduced by Rep Nita Lowey (D-NY17) and Senator Chris Murphy (D-CT), the bill would provide caregivers Social Security earnings credit when they take unpaid time off from employment to provide care, whether by exiting the work force or reducing their hours. The credit would be added to earnings to calculate future Social Security retirement benefits for the caregiver. The amount of the credit would depend on the number of hours spent caregiving and the amount of outside income earned. As Senate sponsor Chris Murphy said in a press release, “People who care for loved ones deserve our gratitude. Penalizing caregivers by docking the Social Security benefits they count on is backwards.”

The Social Security Caregiver Act follows a long-established tradition in the majority of higher-income European Union states, including the United Kingdom, Switzerland, France, Germany and Sweden, that have successfully established caregiver credits as a component of their public pension (Social Security equivalent) programs. Such measures have markedly improved benefit adequacy for women in these countries. They have been funded in part by reducing auxiliary benefits, an idea that the United States could also consider phasing in over time.

The Little Red Hen is a folk hero because of her self-reliance and ability to make something of what’s around her. It is a cruel irony that her marital status would determine her financial wellbeing in retirement.