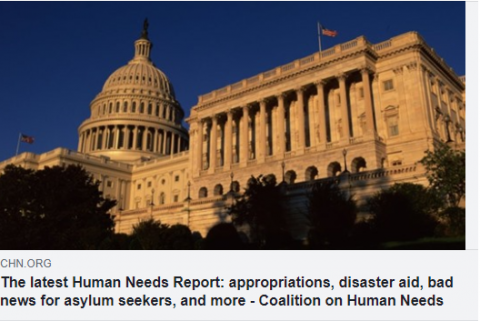 The Coalition on Human Needs just released another edition of its Human Needs Report. Read on for the latest on Congress's spending work, disaster aid for Puerto Rico and several states, a tougher path for asylum seekers, a rollback of payday lending protections, and more.

House Begins Work on Spending Bills without Agreement on FY20 Spending Caps
Several House Appropriations subcommittees took up spending bills covering their areas of jurisdiction the week of April 29, even as an agreement between the House and Senate on FY20 top-line spending limits has yet to be reached. Without a new caps deal, spending on defense and nondefense programs would be cut by billions. READ MORE »

Labor-HHS-Education Spending Bill Contains Important Gains for Human Needs Programs
The House Appropriations Subcommittee on Labor, Health and Human Services, and Education passed its FY20 spending bill on April 30. The proposal, which will be taken up by the full House Appropriations Committee this week, contains increases for numerous important human needs programs. Get the details here. READ MORE »

Senate Reportedly Closer on Disaster Relief
Senate negotiators reportedly are coming close to reaching agreement on disaster aid to victims of hurricanes, wildfires, tornadoes, flooding and other natural disasters that have devastated both states and U.S. territories over the past several years. The House also plans to take up its own disaster aid package this week. READ MORE »

Trump Administration Calls for Additional Border Funding Along with Tougher Path for Asylum Seekers
The Trump Administration on May 1 requested an additional $4.5 billion to deal with the influx of migrants at the U.S. southern border. The funding request came just days after the Administration proposed major changes to U.S. asylum policies, including charging a fee to asylum seekers. READ MORE »

Deadline Approaching for Payday Lending Comments
The May 15 deadline is fast approaching for submitting comments in opposition to the Trump Administration's proposed rollback of a rule that would protect consumers from predatory payday lenders. READ MORE »