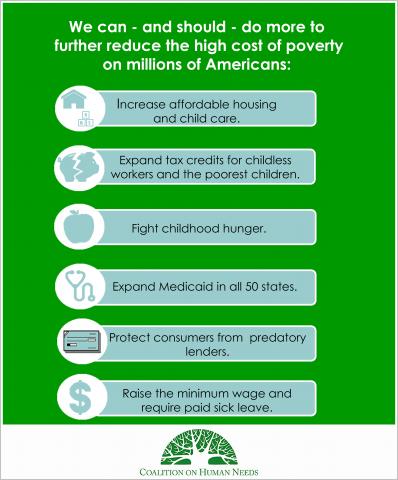 The High Cost of Being Poor in Your State

Check out this great piece by Ana-Elisa Gentle, the Coalition on Human Needs' intern, on the work state partners are doing to spread the word about the need for effective anti-poverty programs.

In the wake of the September release of the 2015 Census Bureau data on poverty, the Coalition on Human Needs put out a national report, The High Cost of Being Poor in the U.S., which detailed our findings on the state of poverty around the country and what measures helped pull people out of poverty last year. The Census data show that anti-poverty programs like the Supplemental Nutrition Assistance Program (SNAP), Earned Income Tax Credit (EITC) and housing subsidies were vital in keeping millions of Americans out of poverty in 2015. To follow our national report, we analyzed the Census American Community Survey (ACS) data to explore the state of poverty in 13 states. Over the past few weeks, partner organizations in each state have been hard at work releasing these reports and spreading the word about what should be done to reduce poverty. Here’s what some of our partners have been up to, along with where you can find more information on the state of poverty in your state: The first state report was released with the Community Action Association of Pennsylvania (CAAP), a statewide organization of community action agencies that work to help low-income families become self-sufficient. The report was publicized during their four-day symposium called Embracing Change. CHN’s executive director Debbie Weinstein attended the event to present on the income and poverty statistics discussed in the report. CAAP released the report on their website and social media outlets, including Twitter and Facebook.

A state report was also released with our friends at Every Child Matters in Maine, an organization that works at both the national and state levels to make children a political priority. The report, which discusses the stagnant poverty rate in Maine, can be found on their website and on their Twitter account. It was also featured in a weekly newsletter.

Empower Missouri, an advocacy organization that works to improve the lives of Missourians, joined CHN to help spread the word about our state report in Missouri. A synopsis of the report can be found on their website and accompanying social media posts on Facebook and Twitter were released as well. 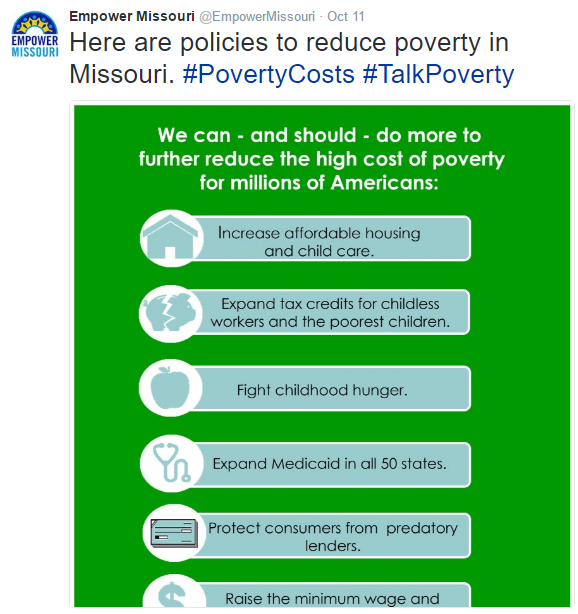 CHN also partnered with Every Child Matters in New Hampshire to release the state-specific report at a news conference. This event was covered by New Hampshire Public Radio, the Concord Monitor and the Concord Patch. It was also attended by representatives of New Hampshire’s congressional delegation and the Governor’s office. Details from the report were also shared on Twitter and in a weekly newsletter. 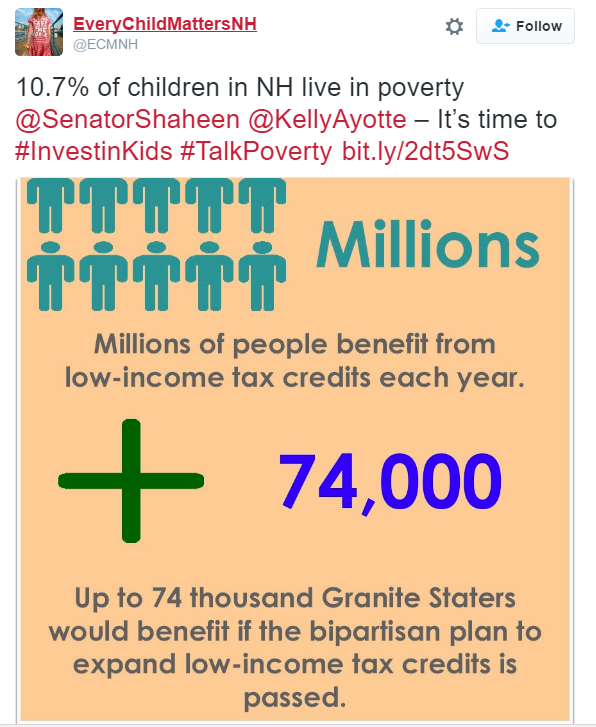 In Ohio, CHN partnered with our friends at Advocates for Ohio’s Future, an organization that promotes health and human service budget and policy solutions. The report can be found on their website, Twitter and Facebook accounts. A number of media outlets picked up the report with coverage by the Columbus Dispatch, Sidney Daily News, Hannah Report and Gongwer. 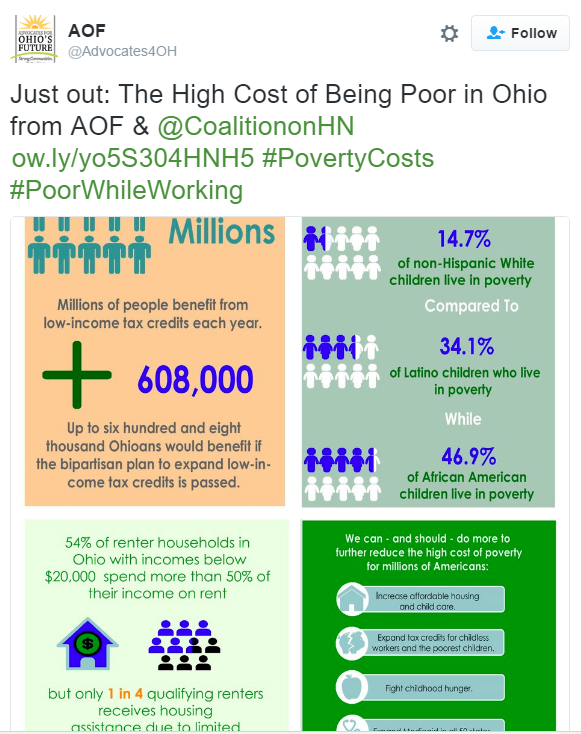 Finally, CHN partnered with the Virginia Interfaith Center for Public Policy, an organization that works to promote policies that help low-income, vulnerable and underrepresented populations in their state. We released our report with social media coverage on Facebook and Twitter and it was recently covered by the Augusta Free Press.

All of our state partners are sharing these reports with their members of Congress, and you can too to raise awareness on the state of poverty and effectiveness of anti-poverty programs. Not sure who your representatives are? That’s okay, you can look them up here. Then head over to your state-specific media toolkit and find your representatives’ twitter handles to tweet them the report. Be sure to join the national conversation with #PovertyCosts.

For additional resources, check out the Coalition on Human Needs' website for the national and state reports with infographics and state media toolkits to help you share on Facebook and Twitter. Go to our 2015 Census and Poverty Data resources page for more Census information from organizations around the Coalition. Stay tuned to the Voices for Human Needs blog for more information on the release of additional state reports!