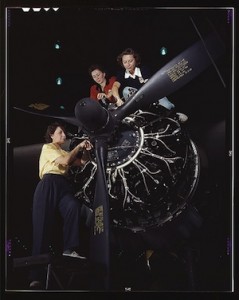 As you may have heard, women still make only 77 cents on every dollar a man earns, and in recent years, progress on closing the pay gap has nearly ground to a halt. On Wednesday, the Paycheck Fairness Act, which was supposed to right this wrong, was defeated on the Senate floor.

I’ll try not to get too wonky about this, because it’s Friday, but there are a few things I think you should know.

What often gets left out of the whole pay gap discussion is that it not just about women, it’s about mothers in particular. Here’s how the pay gap breaks down: [1]

If those numbers don’t make you queasy, maybe this will: [2]

Keep in mind that more than ever, women are primary or co-breadwinners for their families, so when they make less money for equal work, the whole family is affected. This pay gap isn’t just a women’s issue. It’s a child issue. It’s a husband issue. It’s a family issue.

I keep thinking about my friend Jackie, who will put up with just about anything to keep her job because she has a little discretionary flex time. Or Lily, who was advised by a senior (male) colleague to keep mum about the fact that she’s, well, a mum. Or another friend of mine, who I haven’t written about (yet), who was passed up for promotion by a less capable coworker because she works four days, not five.

This is what I want to know: How much of this pay gap can be explained by our own feelings of guilt because we have obligations outside of work? If we understood our real value, would we be just as willing to participate in this Great Mommy Markdown?

Some people would have you believe that women make less because they “work less hard and are less productive” although there is no statistical evidence for this. On the contrary, studies show that women’s labor is incredibly valuable to their employers. Allow me to share a few facts: [3]

It’s well-documented that men and women negotiate differently at work, and that women often get shortchanged because they don’t ask for resources as frequently as men. I suspect this is true for women at all levels of leadership.

Mothers of course, have a lot at stake when they’re supporting their families, so perhaps that makes us more risk-adverse. But knowing our families need our income could also make us more motivated to get what we’ve earned. I’d like to humbly suggest that we learn to be a little less humble when it comes to advocating for ourselves at work.

By the way, if you’re as disgusted as I am by the senators who voted The Paycheck Fairness Act down, sign the MomsRising petition.

[3] Source: Brad Harringon and Jamie J. Ladge “Got Talent? It Isn’t Hard to Find: Recognizing and Rewarding the Value Women Create in the Workplace”