The Elephant in the Living Room

There's an elephant in the living room, and she's getting impatient. While many politicians stand ready to support the stabilizing impact and economic importance of gender equality overseas; too often those same politicians turn their backs on gender equality policies here at home. In the last debate, for example, which centered on foreign policy, Governor Romney had no qualms saying that pushing forward "gender equality"is one of the top four ways that the U.S. can help push back terrorism in other countries. 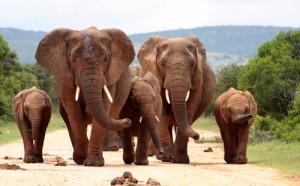 Elephant family discusses how to support the kids and make trunks meet while dealing with the gender wage gap.

Therein stands the elephant in our national living room.

It's not as if the U.S. is leading the world in terms of gender equality, and we don't have any work left to do here at home. The U.S. ranks a low 22nd among nations according to the 2012 Global Gender Gap Index, which measures the gap between men and women in four categories: economic participation and opportunity, educational attainment, health and survival, and political empowerment.

We have lots more work to do.

Women's wages in the U.S. are stuck at 77 cents to a man's dollar for full-time year round work, with mothers and women of color experiencing gap that's larger still. The U.S. ranks a low 80th of all nations in terms of women's representation in our national legislature. Only 4 percent of the Fortune 500 CEOs are women. The U.S. lags behind more than 150 other nations on paid family leave and earned sick days policies, both of which are critical to the economic security of women and their families.

Even those sobering reminders of our nation's failure to promote women's equality may not be the most disturbing part of the public discourse for women in this election. More appalling is that prominent, mainstream candidates for high-level office seem to hold dangerously archaic views on rape, which is one of the most basic health and safety issues for women--and for gender equality. Protection from rape, and the ramifications of rape, is at the core of what's needed for) true gender equality. Any policy that stands in the way of that basic protection stands in the way of girls and women. It's that simple.

But some politicians don't seem to understand the connection between rape and gender equality in America. Take the recent appalling statements by leaders like Illinois Rep. Joe Walsh, Iowa Rep. Steve King, and Missouri Rep. Todd Akin--who dismissed the impacts of rape, suggested there's such a thing as "legitimate" rape, and ignored basic biology facts to say, "If it's a legitimate rape, the female body has ways to shut the whole thing down." Indiana U.S. Senate candidate Richard Mourdock recently piled on the victim blaming relating to rape, saying: "Even when life begins in that horrible situation of rape, it is something that God intended to happen." Governor Romney maintains his endorsement of Mourdock even after this recent statement--and, as on the fair pay issue, Governor Romney remained silent.

The irony is that this type of backsliding on basic gender issues is happening at home at a time when there's a huge body of evidence from around the globe showing that gender equality policies ranging from investing in continuing education for girls, to pregnancy and sexual violence prevention, and to job availability and non-discrimination, help stabilize nations and strengthen economies.

We know, for instance, that combating adolescent motherhood would save India $383 billion annually; and that if young Nigerian women had the same employment rates as young men, that country would add $13.9 billion to its economy each year.

But here in the U.S., too often it's "duck and cover" on using this type of calculus. It's like there's an invisible force field around implementing gender equality policies in our own nation even as we voice support for them outside our borders. That's a shame because that short sightedness costs men, women, families and our economy alike.

Of course, not all politicians, or all candidates, are against gender equality policies here at home. President Obama, for one, has come out strongly supporting such policies as the Paycheck Fairness Act, and has also stated his consternation at this backward trend that some politicians are leaning toward: "...These attempts to re-define rape in some way make no sense to me, and I don't think they make sense to the vast majority of women across the country."

Now through November 6th, it's important to vote for the candidates who will advance gender equality both inside and outside our nation's borders.

Let's not ignore the elephant in the living room on Election Day.