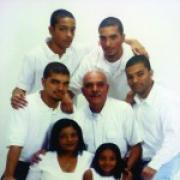 Tracy Muñoz
Share This
Add your voice to the comments

Despite the fact that my husband and I both had jobs and were covered by private health insurance, our family’s credit history was damaged after I was in a car accident in 1998 and needed hip replacement surgery. We had to take drastic financial measures in order to pay for thousands of dollars in costs that were not covered by our insurance. It was obvious to me that our country needed health care reform.

And indeed, my family of seven is already seeing the benefits of the Affordable Care Act. Getting my 22-year-old healthy son to go to the doctor is like pulling teeth. But I feel at ease knowing that he has health insurance and can’t be dropped because of an accident or serious illness.

Thanks to a provision that allows children to remain on their parents’ health insurance plans until they are 26, I have two adult children on my heath insurance plan, including my 22-year-old son and a 24-year-old son who has a child, attends graduate school and works part-time. If it weren’t for ACA, my 24-year-old would have to drop out of school and face poor job prospects in our present economy. Indirectly, the real possibility of having no insurance would impact the choices he makes to support his son, his career path and future earning potential.

Additionally, I work in benefits for a school district and have seen other ways that ACA has helped families like mine. Preventative care like check-ups are now free thanks to ACA. Last year, our school district’s health insurance company tried to raise our rates by 18% but were prevented from doing so because of ACA. I can see the many ways that this law helps families.

Tracy Muñoz, a MomsRising member in Norfolk, Virginia, is the proud mother of five children.