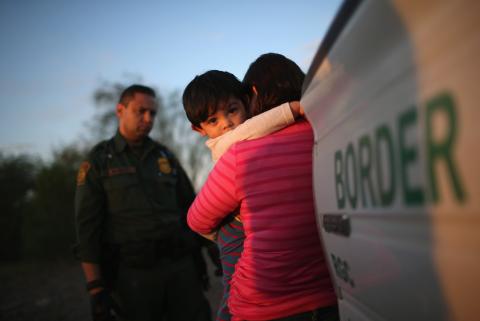 Tell Trump and the Department of Homeland Security: Separating Children from mothers is traumatizing and a human rights abuse!

Joana, at only one and a half years old, was still nursing when ICE agents separated her from her mother after they crossed the border seeking safety. The toddler was finally reunited with her mother after three devastatingly long months of separation.

Outrageous! Trump has just proposed that the Department of Homeland Security enact a policy of purposefully separating children and mothers who are seeking asylum at our southern border.

Let’s get one thing straight here: Many of the mothers and children seeking safety at our southern border are fleeing what has become known as the Northern Triangle of Central America: Parts of Honduras, Guatemala and El Salvador. This region has the most homicides and is considered the most violent in the Western hemisphere.

In fact, U.S. Citizenship and Immigration Services – a part of the Department of Homeland Security – found that 88 percent of these mothers and children had credible fear that meets the threshold for qualifying for asylum. Yet, almost none of them have received adequate legal representation. Shockingly, 80 percent of all refugee children from Central America continue to face their hearings alone.

As a mother and as an immigrant, I ask you to join me to STOP this proposal.

*TELL Trump and the Department of Homeland Security: Do not rip children away from their mothers as they enter our country fleeing trauma and seeking safety, this doubles the trauma to children, and is a human rights abuse in the name of immigration enforcement!

We as a nation must protect children and keep families together.

This policy, if advanced, will cause extreme and unnecessary harm to children who have already experienced horrible trauma. It is nothing more than a blatant human rights abuse masquerading as immigration enforcement. This proposal is a direct threat to our nation’s values of family unity and curtails the fundamental right of all mothers to do what is best to protect their children.

---> As mothers ourselves, we stand up against this ineffective policy that is cruel to children. Join us in signing on here now: http://action.momsrising.org/sign/Proposal_Separating_Children_from_Mothers_at_SouthernBorder

Trump is doubling down on the extreme trauma that children fleeing life-threatening violence face. Evidence shows that kids who are separated from their parents after dangerous journeys north are often re-traumatized.

Experts agree that “prolonged separations from parents have profound disruptive influence on children's development.” Separating children from their mothers is damaging. In fact it is cruel and un-American.

Mothers stand against this atrocious proposal. We will not sit idly by as the Trump administration and the DHS attempt to undermine the fundamental freedoms that define our families and our democracy.

*TELL Trump and the Department of Homeland Security: Do not rip children away from their mothers as they enter our country, this is deeply traumatizing to children, and is a human rights abuse in the name of immigration enforcement!

Thank you for all you do for our families!

Take Action!
Sign On To Protect Kids and Families!