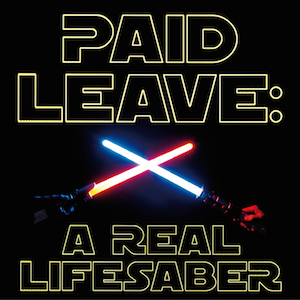 A long time ago, in a galaxy far, far away, there was the Force, which could do amazing things.

Right here, in this galaxy, on this planet, in the United States, another, very, very strong force is awakening. It is the force of moms and dads and working families calling on elected officials to get moving--at light speed!--and pass national paid family (maternity, paternity, medical) leave insurance because, paid leave? It’s a real lifesaber.

We don’t need to use Jedi mind tricks to sway Congress. Together we are a force to be reckoned with when we use our "outside" voices.

** Click here to tell Congress to support and co-sponsor the Family and Medical Leave Insurance Act now, before Congress goes on recess (and home to watch Star Wars).

Jokes and puns aside, the fact is that we have a national emergency of epic proportions. A study released this fall shows that right now in the United States 1 in 4 employed mothers are back at work just TWO WEEKS after giving birth because they don’t have access to paid family leave. In fact, the US is the only industrialized nation in the world (and maybe galaxy) without some form of paid leave for new moms.

This is unacceptable. This is devastating for working families AND for our national economy. This is something we need to gather our forces to fix.

Fixable, it is. Tell Congress to work at lightspeed to support and pass the FAMILY Act!

The lack of paid family and medical leave can drive families below the poverty level. Too often the pay gap that happens when a new mom has to take unpaid leave after the birth of a baby is coupled with the sky-high cost of child care, setting families back financially for years to come. That's one reason that right now, a quarter of young families are living in poverty.

Paid leave insurance isn't an experimental policy that could "break the bank," as some have said. It's been tested and proven to help families, businesses and the economy. The proof is in the impact it has had in other countries and several U.S. states.

A 2011 study of the California Paid Family Leave program found most employers reported that providing paid family leave had a positive effect on productivity, profitability and performance, turnover and employee morale. Also, a national study, "Pay Matters: The Positive Economic Impacts of Paid Family Leave for Families, Businesses and the Public," found that moms with access to paid family leave were more likely to be in the labor force one year after having a child and significantly less likely to rely on government programs, saving taxpayer dollars. A win-win.

Moving a national paid family and medical leave policy forward also helps level the playing field for small businesses so they can better compete with other businesses that already have paid family leave in place.

Here's how it works: The FAMILY Act (The Family And Medical Insurance Leave Act) is a social insurance program that would provide workers—including those who are self-employed and/or work part time—with much-needed income while they, or a family member, deal with the arrival of a new baby or a serious health issue. Eligible employees could take up to 60 paid workdays (12 weeks) away from their job with partial wage replacement (up to 66% of their typical wages) to take care of a new baby, themselves or a family member in a one-year period. The new, self-sustaining fund would be created through very small, employee and employer payroll contributions of about two-tenths of 1% each, which is only about $1.50 per week for a typical worker.

Under the FAMILY Act, employees could take paid leave for the same reasons that they can take unpaid FMLA leave today—for the birth of a child, their own serious health issue, including pregnancy, or to deal with the serious health issue of a parent, spouse, domestic partner or child. In addition, the program would allow people to care for a new child and/or be used for particular military caregiving and leave purposes.

We need Congress to act! There is no "try." Pass the FAMILY Act we must!

The good news is that the Force is strong with MomsRising members and momentum is on our side. 2015 may become known as the official tipping point in the campaign for paid family leave, the year it became clear to everyone that we're talking WHEN and not IF paid leave comes to the U.S.

President Obama kicked off the year announcing that federal employees will be able to get an advance of their paid leave to care for a new child, for adoption proceedings or for the placement of a foster child in their home. In 2015 A DOZEN municipalities passed paid leave for local government employees. Several states and cities, including New York and the District of Columbia, are on the verge of passing paid family leave. The Department of Labor awarded a total of $1.5 million to a combination of eight cities and states to study how to implement paid leave insurance programs.

But access to paid family leave can’t be just a matter of winning the “boss” or location lottery. A patchwork system doesn't work. We need a NATIONAL paid family leave insurance. Whether it’s to care for a newborn you swear already smiles, a mom who is ill, or a spouse battling cancer, being there for family is what matters. You shouldn't have to give up a paycheck to do it.

The force for paid family leave has awakened. Congress needs to heed it and take action to pass the FAMILY Act.

** Share this with family and friends by posting the action link above on Twitter, on Facebook, and by forwarding this blogpost around to everyone who cares about boosting paid family leave!

Take Action!
There is no "try." Pass the FAMILY Act we must!