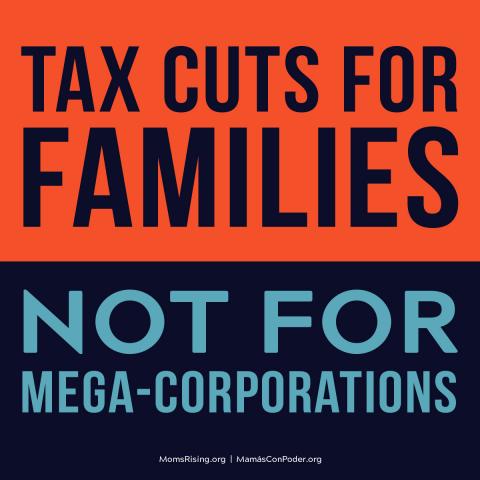 We are moving full steam ahead to make sure our elected leaders pass universal childcare, paid leave for all, help for struggling families and working people, and create a fairer tax code for women, moms, families, and everyone impacted by structural racism.

But all of that takes $$$. That’s why it’s a perfect time to make sure the wealthy and mega-corporations are paying their fair share!

We need you to speak out and make your voice heard!

***SIGN OUR LETTER calling on President Biden and Congress to make permanent working family tax credits like the EITC and Child Tax Credit and to make sure the wealthy and mega-corporations pay their fair share in taxes!

We have a lot we need to achieve if we want to fully recover from the COVID-19 pandemic and build back better. Congress and the White House are hard at work putting together a recovery package now that they passed the excellent American Rescue Plan. But you and I both know it’s not enough to go back to where we were. Even before COVID, women, especially women of color, were set up to fail in our economy due to structural racism and rampant gender discrimination. We can’t ignore the deep structural flaws in our economy and country that made the pandemic disproportionately devastating for moms, women of color and their families, and expect an equitable recovery.

One area that moms, women, low-income families, and people impacted by structural racism harmed time and time again is our unfair tax code. But how can we make our tax code more equitable and our nation’s economy more successful? First, we need to make permanent the expansions of the EITC and Child Tax Credit we won in the American Rescue Plan.

These changes are a big deal and are a giant reason to celebrate⎯ and will help bring 50% of our nation’s children out of poverty! We need to make these changes permanent! Those improvements made the full Child Tax Credit available to all children except those with families who have the highest incomes (sometimes called making the credit “fully refundable”), increased the Child Tax Credit to $3,600 for families with kids under 6 and $3,000 for families with kids 7-17 (that’s a lot of money!), and made an expanded EITC available to far more low-paid childless workers—the majority of whom are women who are still helping support their families and grandchildren but are taxed into poverty year after year. [1]

This had giant results⎯ just the improvements to the Child Tax Credit in the American Rescue Plan cuts childhood poverty in half! [2] We need to keep that momentum going by making these expansions permanent!

But we can’t stop there! Millionaires, billionaires, and corporations must pay their fair share of taxes. Right now our tax code is penalizing low-income people at the same time the super-wealthy and big corporations are flourishing and working families are struggling with unemployment, lost wages, and the ravages of a public health crisis.

Rather than cut supports that families turn to when times are tough and boost our nation’s economy, we should raise revenue to invest in our shared success by making the mega-wealthy pay their fair share in taxes. How do we do that? Easy! Congress can start by overturning the terrible Trump Tax Plan which gave away trillions of dollars to the 1% and mega-corporations. We also can pass Senator Elizabeth Warren’s Wealth Tax which would only raise taxes on the 0.05% of highest earners in the country but would net over $3 trillion over ten years, which we could use to create a universal childcare system, build more schools, or help feed and house struggling families. [3] A wealth tax is a wildly popular idea—in fact 3 in 5 Americans support it, including a majority of Republicans! [4]

***Sign our letter now calling on Congress and the White House to rewrite our unfair tax code so everyone can access the programs their families need and the 1% and mega-corporations pay their fair share!

In order to make this happen, we need your help. Please sign this petition, reach out to your member of Congress, and share this action link around to create momentum that builds the political will to do all these important things because we know that this is the real way we build back better and make sure our families have what we need while making sure those who have struggled the most can benefit from a recovered economy. In short, your help is needed in demanding the resources we deserve and need to put us on the path to shared prosperity! (Thank you, in advance, for signing on right now which is a big help!)

Women are the backbone of the economy. We need large-scale public investments in the care infrastructure that makes all other work possible including childcare, paid family and medical leave, a pathway to citizenship for immigrant frontline workers, investments in caregiving options for people with disabilities and aging adults, and permanent expansions of the EITC and Child Tax Credit – to ensure that families can care for their loved ones in times of critical need and that all people who are doing work in the care infrastructure are paid living wages. Women deserve economic security, fair pay, and the opportunity to create a brighter future for ourselves and our families.

But in order to do all of this we need our government to make sure millionaires, billionaires, and mega-corporations—many of whom have seen a windfall during the pandemic—pay their fair share! You heard me right—it’s time to tax the rich to pay for the programs our families and economy so desperately need to fully recover and boost our economy!

Make sure to sign our letter now and after you are done forward this email to your friends and family and ask them to sign as well. We are going to create a huge movement to get these important policies passed to boost our families and our economy!

Thank you for speaking out and making a difference!

[2] “The American Rescue Plan Could Cut Child Poverty Nearly in Half.” The Century Foundation.