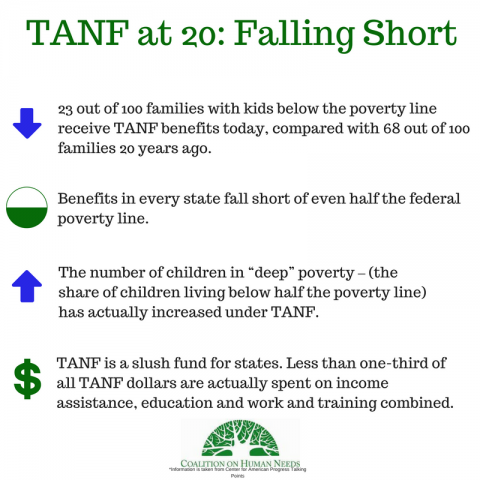 Twenty years ago, President Bill Clinton signed the law that placed a time limit on cash assistance for poor families with children and required some degree of work, job search, or training to receive benefits. The new program, Temporary Assistance for Needy Families (TANF), replaced Aid to Families with Dependent Children (AFDC), a program pretty much nobody liked.

Most people wanted poor parents to work. That included the poor themselves. Thirty years ago, a Los Angeles Times poll asked poor and non-poor people whether the poor wanted to earn their own living, and 68 percent of surveyed poor people said yes, with only 20 percent saying the poor would prefer to stay on welfare. Those who weren’t poor substantially agreed, with 62 percent agreeing the poor would rather work and only 25 percent saying the poor would rather stay on welfare. Welfare was seen by less than one-third of poor people surveyed as providing a chance for people to stand on their own two feet and get started again (and only 16 percent on the non-poor thought so). Instead, 43 percent of the poor and 61 percent of the non-poor people polled agreed that welfare encourages people to stay poor.

While there was a lot of agreement that helping poor mothers to get jobs would be a good thing, those of us who opposed the new law 20 years ago had grave doubts that TANF would accomplish that goal. We were afraid that people would not be able to comply with the new requirements and would lose assistance without having other sources of income to live on.

In the first years after TANF became law, many mothers did enter the labor force. From 1995 to 2000, employment rates for single mothers rose from 61.7 percent to 73 percent. TANF proponents gave TANF the credit for this large increase, and did not acknowledge the importance of the increasing number of jobs available in a booming economy and the incentives provided by expanded tax credits for low-income workers and more subsidized child care. But as the years went by and the economy cooled, employment rates began to decline. In 2012, well after the official end of the Great Recession, single mothers’ employment had dropped to 65.7 percent.

Without the vigorous job creation of the late 1990’s, it is easier to see that TANF is not an effective route to employment. New data recently released for 2015 show that only 16.9 percent of TANF cases closed because the adult was employed. In contrast, 28.9 percent of cases closed because of various penalties imposed, such as noncompliance with a program rule or failure to show up for an appointment. TANF is supposed to be a welfare-to-work program. But states are not spending very much of their fixed allotment of TANF dollars on work or training programs. Nationally, the average proportion of the TANF block grant spent on work, education and training programs was only6.5 percent in 2015. Quite a few states spent much less. Arizona, which recently reduced the lifetime time limit for receipt of TANF down to 12 months, only spent 1.5 percent of TANF funds on work, education and training. Georgia spent 2.1 percent; Michigan, only 0.3 percent; Nevada, 1.2 percent; West Virginia, 0.5 percent.

Many states are not spending very much on cash assistance or child care, either. Nationally, less than one-quarter of TANF funds were spent on basic cash assistance, which averaged only $398 per month in 2015. No state has benefits that exceed half the federal poverty line. Only 16.8 percent of TANF funds were spent on child care. Here too, quite a few states spent far less. Arkansas spent 6.4 percent of its block grant funds on cash aid, and 0.3 percent on child care. They spent a whopping 63.4 percent on out-of-wedlock pregnancy prevention. Other states spent less than the already low national averages on cash assistance and/or child care, and instead used TANF funds for child welfare services, pre-k programs, or refundable tax credits. Refundable tax credits are a proven work incentive, but tend to be available to workers with higher earnings than TANF recipients would have. Without more education, job training, or subsidized jobs, many TANF recipients, nearly 40 percent of whom have not completed high school, will not get to the point where they can take advantage of expanded tax credits for working families. Child welfare services are vital, but diverting federal funds intended for cash aid and welfare-to-work services to replace state child welfare dollars is contrary to TANF’s purpose.

On this 20th anniversary, poor and non-poor alike still want poor parents to work. A new poll by the L.A. Times and the American Enterprise Institute shows that even more of the poor and the non-poor believe that conditions for poor people, such as education, job opportunities, housing, etc. are pretty bad than was the case 30 years ago. For the non-poor, the shift to greater pessimism was particularly striking. Thirty years ago, 61 percent of the non-poor thought conditions were very or somewhat good for the poor. This year, only 37 percent of the non-poor thought that, and the proportion who thought conditions were bad rose from 32 percent to 44 percent. More of the poor think conditions are bad too, although the shift is not quite so pronounced. Then as now, about one-third of both poor and non-poor believed that government has the greatest responsibility for helping the poor, a higher proportion than any of the other options, such as the poor themselves taking responsibility, or churches or charities. That does not mean that people believe the government should provide benefits without requiring work or training. In the recent poll 91 percent of the non-poor and 81 percent of the poor agreed with those requirements.

But in recognizing that times are pretty tough for the poor, it follows that they need effective help to find and keep jobs and to keep their children safe while they work. TANF is not doing that. Some of what’s needed goes beyond what TANF can do, especially since it has been flat-funded for years, and has lost more than one-third of its value to inflation over the past two decades. The number of child care placements has declined when it should be growing. We should be investing in subsidized jobs for those with the least work experience. During the Great Recession, Congress enacted a TANF Emergency Fund that did successfully provide hundreds of thousands of subsidized jobs; Congress let the program expire. We should raise the minimum wage, require paid sick leave, and improve the predictability of work hours. Those changes, many well beyond TANF’s scope, would make it easier for low-income parents to work. TANF should allow parents to get post-secondary credentials to qualify for decent jobs; that more education is essential is now endorsed on a bipartisan basis, as recently as today by Governor John Kasich of Ohio in a New York Times opinion piece.

TANF as it operates today leaves close to two million children below half the federal poverty line, with little help to rise out of deep poverty. Congress and the next Administration should recognize its shortcomings. That means requiring states to spend more of TANF funds on cash assistance, work and training programs and child care. States should no longer be rewarded for dropping families from the TANF caseload or discouraging them from applying through job search and other requirements that just serve to bar the door to assistance. It also means increasing funding to reverse the losses in child care and to invest in work programs.

We know a lot more now about how poverty hurts children – the stresses from frequent moves, not enough to eat, and living in dangerous neighborhoods take their toll on children’s bodies and minds. Poverty hurts mothers, too, who struggle with depression and health problems. TANF reaches so few poor families now that most poor parents either don’t even know it exists or think it’s irrelevant in their lives. Denying assistance without offering help does not make TANF a successful program. Recognizing that the poorest families need more help, not more restrictions, is the surest way to build towards the broadly shared goal of steadier, better-paid work.