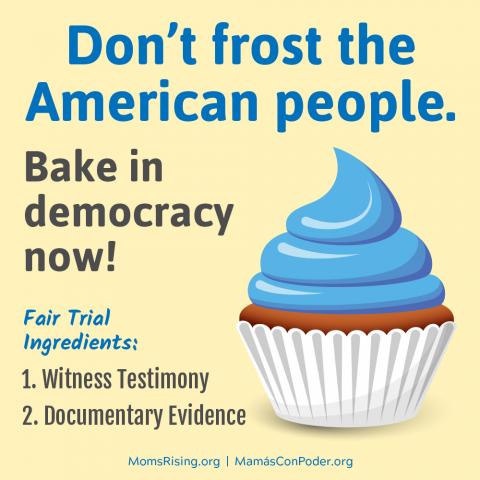 Take action! Tell your U.S. Senators to vote for witnesses and documents!

As moms, we know we must protect our democracy for our children—and for our nation.

By the end of this week, the U.S. Senate will face a crucial vote in the impeachment trial of President Trump. What’s at stake is whether witnesses and new documentary evidence can be presented BEFORE a vote to remove the President of the United States takes place.

It’s a no-brainer that the ingredients for a fair trial would include witnesses and documents!

Quick signature: Tell your U.S. Senators that the ingredients of a fair trial include 1) witness testimony and 2) documentary evidence!

As Senate Minority Leader Chuck Schumer said, “A trial with no evidence is not a trial at all; it's a cover-up.” That's exactly what Mitch McConnell is doing right now. That’s why MomsRising is taking action NOW to say NO to a cover-up and demand that the U.S. Senate allow witness testimony and documentary evidence during the impeachment trial.

Dear U.S. Senators: The American people deserve for you to honor your oath to be impartial jurors and we demand a fair impeachment trial. The ingredients for a fair trial include: 1) witness testimony and 2) documentary evidence!

Please vote to hear from all relevant witnesses and for all relevant documents to be submitted to the U.S. Senate before you vote on the removal of President Trump.

There has never been an impeachment trial without witnesses. There is no sound reason not to permit new evidence. If Republicans choose to move ahead without witnesses or documents, then this trial is a complete sham.

The more people who speak out, the bigger our impact. Please take a moment to forward our action link to your friends and family and share our action link on social media.

Together we are a powerful voice for our democracy.

P.S. There are impeachment events happening all over the country! Find one near you: https://www.impeachnow.org/

Take Action!
Demand a Fair Trial in the Senate Now!