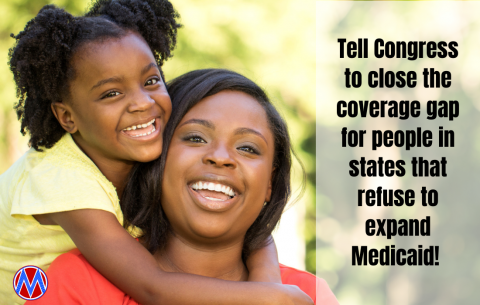 Last week, the U.S. Supreme Court rejected yet another attempt to dismantle the Affordable Care Act (ACA). This is huge and a victory for families across the country—the ACA is here to stay!

While we celebrate this decision, it is also important to recognize that this Republican-led effort to rip health care away from tens of millions of people happened in the middle of a pandemic! Furthermore, the fight against expanding health coverage is still alive and well in over a dozen states as their legislatures refuse to adopt (or in some cases implement) the expansion of health care to low-income uninsured adults. We need a federal solution to help get health coverage to the more than two million poor uninsured adults who live in these non-expansion states.

*Quick signature: Tell Congress to close the coverage gap for people in states that refuse to expand Medicaid!

What’s the deal? When the ACA passed, Congress intended for low-income uninsured adults to gain coverage through the expansion of Medicaid—a joint federal and state program that provides health insurance coverage to millions of people across the country. However, a 2012 U.S. Supreme Court decision made the expansion of Medicaid optional for states. Thus far, 38 states including Washington, D.C. have expanded Medicaid, but there are still 12 states refusing the expansion which has left millions of people in the Medicaid coverage gap.

These 12 states are primarily in the South, where eligibility for Medicaid is still extremely limited. For example, the median income limit for parents to qualify for Medicaid is just 41% of the poverty level or an annual income of $8,905 for a family of three in 2020. And in nearly all of these states, childless adults remain ineligible for coverage altogether.

The COVID-19 pandemic has shown how important it is for everyone to have health care coverage, especially in communities where large health disparities have long been present. In states that expanded Medicaid, racial disparities in both coverage and access to care has drastically decreased. In fact, the gap in uninsured rates between white and Black adults shrunk by 51% in expansion states. Medicaid expansion was also associated with a significantly lower rate of maternal death. Expansion of Medicaid with improved access to coverage and care is crucial, especially during the COVID-19 pandemic and economic crisis.

Sign on now! Tell Congress that Americans should not be denied health care simply because of where they live.