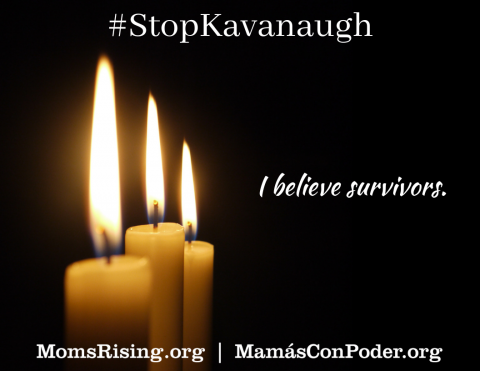 TAKE ACTION: Last chance to speak out against Kavanaugh!

It’s our last chance to be heard. Republicans in the U.S. Senate have pledged to move forward with a vote to confirm Judge Brett Kavanaugh to the U.S. Supreme Court by week’s end, whether or not the FBI has had a chance to fully investigate THREE sexual assault allegations against Kavanaugh. We can not let this happen!

Join with women and families across the country to speak out to #StopKavanaugh. Take action to sign our petition, and, more importantly, to find a vigil near you for Wednesday night at 6pm, as well as get info on other actions you can take to speak out against Kavanaugh before the vote!

**When you click, we’ll email you our #StopKavanaugh toolkit with actions, including, importantly, RSVPing to attend or organize a vigil near you at 6pm tomorrow (Wednesday) night.

Raising our voices right now is critically important. There is now evidence that Judge Kavanaugh lied to the U.S. Senate multiple times while under oath, and with three credible accusations of sexual assault, confirmation of the nominee will have serious implications for the legitimacy of the Supreme Court, itself. In addition, Judge Kavanaugh’s judicial record shows his nomination would have extreme and dangerous implications for our families and communities.

We get it—the constant barrage of overwhelming news can make it hard not to tune out and try to insulate ourselves from the stress of the world (and we encourage you to practice some self-care during these stressful times too!). The national dialogue around this Kavanaugh nomination has been especially distressing for survivors of sexual assault, which is why it is so important for moms, dads, and advocates across the country to stand up and speak out together. We know we have had to ask a lot of you lately, and we are so grateful for your continued efforts to speak out in any way you can. Our toolkit gives you a menu of options that you can choose from so that you can speak out to stand with survivors, including at vigils on Wednesday evening, and #StopKavanaugh in a way that works for you.

With three credible accusers, Dr. Christine Blasey Ford, Deborah Ramirez, and Julie Swetnick, the Senate should be halting the confirmation process so there can be a thorough investigation of these charges—not plowing ahead. Last week, Dr. Christine Blasey Ford courageously testified in front of the U.S. Senate Judiciary Committee. She gave the country an important teaching moment on the devastating impact of sexual violence with her dignified, forthright, persuasive testimony about Supreme Court Nominee, Judge Brett Kavanaugh.

This is a pivotal moment in our national discourse on how we treat survivors of sexual assault and we truly need everyone to stand up and speak out. We have seen a national outcry from survivors, sharing their harrowing stories, and demanding our leaders #BelieveSurvivors and fully investigate the accusations against Kavanaugh.

**The voices of survivors and allies are what have made the difference in this fight and we need to keep up the pressure! Click now to find a vigil near you for tomorrow night, or to sign our petition, and receive your #StopKavanaugh toolkit with more actions you can take.

The current situation is not okay. Despite Dr. Ford’s courageous and credible testimony and Kavanaugh’s antagonistic and disingenuous responses to questions by many on the Judiciary Committee last week, Senate Majority Leader, Mitch McConnell is still pushing to confirm this nomination by the end of the week.

To be clear, these allegations aren’t the only thing to be concerned about with Judge Kavanaugh. Judge Kavanaugh’s judicial record is already strong evidence that he would deny families health care and education, cause lasting damage to our ability to live and work free from discrimination, jeopardize a range of gun safety laws, and support President Trump’s sexist, racist, xenophobic, anti-immigrant agenda. In addition, the confirmation process has been flawed from the start, with huge swaths of Kavanaugh’s record being withheld—it never should’ve started until his full record was released.

We’re asking EVERYONE to join in to show up for survivors and to speak out against Kavanaugh’s confirmation to the U.S. Supreme Court. We can create the pressure to stop this confirmation—but we need everyone to speak out!

Time is short, and our voices must be heard! Join with fellow moms, dads, and across the country to speak out for survivors of sexual assault and against the nomination of Judge Kavanaugh to the Supreme Court of the United States! Find a vigil near you for tomorrow night, sign our petition, and get your toolkit now.

Take Action!
Last chance to speak out against Kavanaugh!