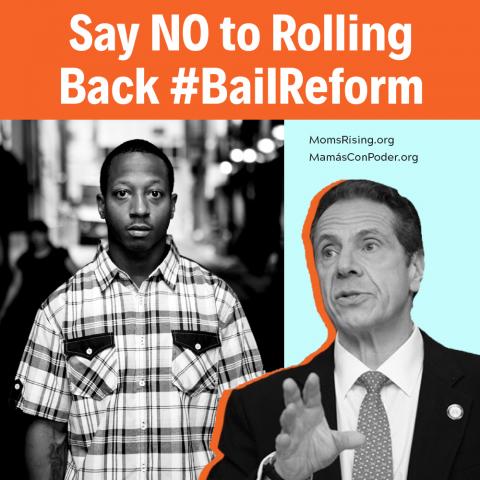 Too many families are forced to experience the inhumane realities of what it is to be incarcerated inside of a New York jail, especially one like Rikers Island, for no other reason than their inability to pay cash bail. The same was true for 16-year-old Kalief Browder who was tortured for over three years (two of them in solitary confinement), simply because his family could not afford bail.

“My mother blamed herself for Kalief’s detention because she couldn’t afford the $3,000 bail money. She cried herself to sleep every night while he was away, filled with guilt for not being able to help her child.” Deon Browder, brother of Kalief Browder[1]

People like you, and our members from all over the state spoke up about the injustices of cash bail and New York State made the responsible decision to pass bail reform last session. As a result, there are nearly 7,000 fewer people being held in county jails on any given day.

Now, during the COVID-19 pandemic, Gov. Cuomo wants to roll back those gains, once again putting families like the Browders at risk. Tell Governor Cuomo to keep bail reform as it is!

The bail law rollbacks proposed by Governor Cuomo and the State Senate will increase the number of people in jails and the length of time people will spend in jail. Rolling back bail reform would mean more people unjustly in jail without a trial, which is not only inhumane, but threatens further spread of coronavirus.

Now more than ever, we need Gov. Cuomo to take immediate action to protect ALL New Yorkers and NOT roll back critical reforms on bail. Instead, the Governor has decided to expedite the process of passing bail reform rollbacks into the budget ahead of the original date of April 1st. Rollbacks on bail reform means thousands more innocent New Yorkers being held away from their families and children, AND puts an extreme threat on the health and safety of incarcerated peoples, correctional staff, and anyone who comes near any New York jail because of where we currently stand with COVID-19. How are the incarcerated supposed to socially distance themselves in the already existing harsh and resource-limited conditions of New York’s jails? They can’t.

The new bail and discovery laws are alleviating some of the hardships, like those faced by Kalief and his family.  Hardships like loss of jobs, homes, mental health and a myriad of other opportunities that people-- specifically poor people of color-- face when they are arrested and thrown in jail without being charged a crime.[2]

Sign our petition letter now and tell Governor Cuomo to keep bail reform as it is!

We’ve made massive efforts to change New York’s cash bail system as we know it and it is working. Parents and families across New York State who celebrated the implementation of bail reform on January 1st, 2020 have children and other loved ones who have languished in jail pretrial. Many of us have children in our lives  or know someone who watched their parents and loved ones suffer in jail on bail they could not afford. Others of us who have not been directly impacted by New York’s unjust pretrial system stand in solidarity with parents who have been devastated as they watched their children be subjected to the violence of New York’s jails or were separated from their children by an inability to afford bail.

New York jails are currently acting as petri-dishes for coronavirus. Resources are limited, cells are unsanitary, and thousands of lives are at risk. Just this weekend, 21 inmates and 17 employees at Rikers Island have tested positive for COVID-19. We need our political leaders and Governor Cuomo to ACT now and save lives from unnecessary risk. By keeping innocent people in jails, our leaders are not helping to flatten the curve, they are exacerbating it.[2]

Cuomo must do all he can to make sure that there are ZERO rollbacks on bail reform in the upcoming budget.

Public health officials across the country have made one thing crystal clear: jails and prisons are not equipped to provide high-quality and comprehensive healthcare, and pose an immediate public health risk to incarcerated people and our communities. As the budget approaches, we ask our political leaders and Gov. Cuomo to stand with us and our families, to continue to fight for ALL New Yorkers and to insist on the full and fair implementation of the new pretrial laws that hold prosecutors and other system actors accountable.

We emplore Gov. Cuomo to invest in our communities through education, housing, healthcare, and mental health services. Our families deserve resources and support, not money bail or pretrial jailing. SIGN ON WITH US!