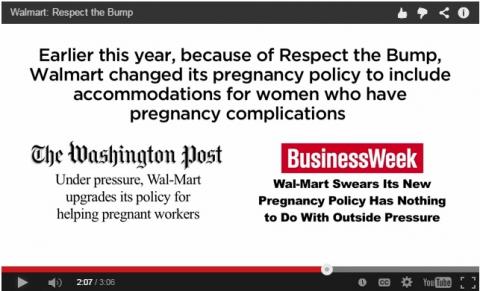 Walmart. On one hand we have the Walton family—Walmart’s owners. With almost $150 billion in wealth, they are the richest family in the nation. On the other hand, we have Walmart workers, most of whom work for less than $25,000 a year. Most are women. And this Thanksgiving, more than 1 million of them have to go to work instead of spending the full day with their families. The following day—Black Friday—thousands of Walmart workers and community allies will be striking and protesting all over the country, calling on Walmart to end retaliation for workers who speak out for better working conditions and pay.

I stand with the Walmart workers. Let me count just some of the reasons why:

Join me in supporting Walmart workers. Sign the petition calling on the Waltons to pay Walmart workers $15 an hour and provide them access to full-time jobs. Then enter your zip code here to find a Black Friday protest near you. I’m taking part in the Portland, Ore., event and I’d love to see you there if you’re in the area.

I wish you a very happy Thanksgiving. I hope you are able to spend it with your family—and, of course, plenty of good food.