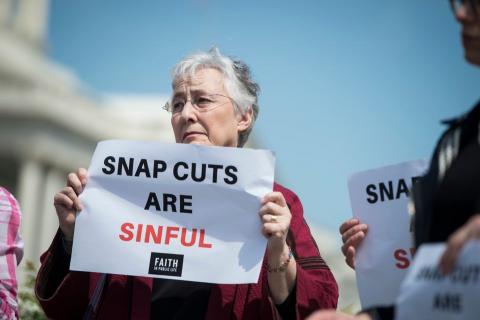 Success in defeating harsh cuts to SNAP in the House!

Deborah Weinstein, Executive Director of the Coalition on Human Needs, on the success in defeating harsh cuts to SNAP/food stamps in the House of Representatives:

The defeat of the farm bill is a great victory, because it is a rejection of mean-spirited and wrong-headed cuts to the Supplemental Nutrition Assistance Program (SNAP, formerly called food stamps).

Advocates nationwide – you – worked very hard to make sure that members of Congress understood that the bill would take food away from two million people – children, workers, older people, and people with disabilities. The bill would have set up roadblocks to assistance that will hurt families, and would not help workers get steady jobs. It would even deny free school meals to 265,000 poor children.

Advocates should celebrate this victory, but we must also recognize that it is fragile. Attempts are continuing to turn votes around; they have through Tuesday to reconsider this harmful bill. Here is the roll call vote list:  http://clerk.house.gov/evs/2018/roll205.xml. Take a look – if your representative voted no, tell him/her you’re glad they did, because the SNAP cuts in this bill would hurt millions of people. If your representative voted for it, tell him/her you are very disappointed, and urge them, if there is another vote on this, to vote NO, to prevent wrong-headed cuts that will deny food to millions.

But also feel great about the work that you’ve contributed to. Many thanks!

(For more about why the Coalition on Human Needs opposed this bill, here’s the letter we sent to Congress.)