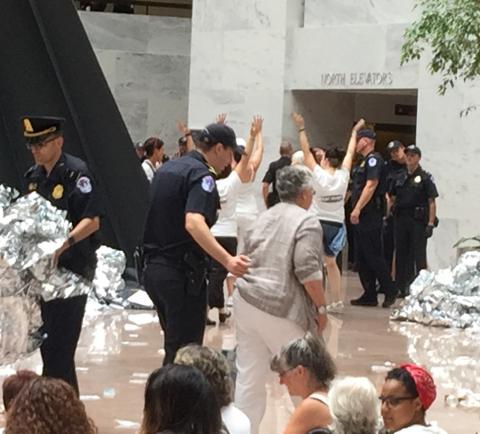 Here’s what Ramona said (she’s 8): “I have been thinking a lot what it would be like if I was taken away from my mom and I think I would miss her a lot and I think I would be really scared.” Ramona and her very good friend Chloe were leading a march in front of a federal building in New Jersey. They are drawing from an essential wellspring of humanity: the ability to put themselves in the place of others, and to understand what justice requires. “I don’t want that to happen to other people even though I know it would never happen to me,” Ramona added.

Yesterday in Washington, DC, grown-up women placed their bodies and their hearts where the children had been days before. More than 500 of us got arrested by sitting down in the Hart Senate Office Building. My favorite chant? “Stop stealing babies!” Most moving, for me, though, was a song:

That’s because Ramona is my granddaughter (I’m very proud). It would be nice to think that her daughter, or son, would no longer have to fight this fight.

But now we do. Children have been badly hurt by this, and are continuing to be hurt with each day of continued detention. It was the choice of the Trump Administration to jail their parents. No law requires it. The Family Case Management Program, which released people crossing the border with access to counsel had nearly complete success in people attending their court sessions, at far less cost to the government. And far less human cost. The Trump Administration canceled that program.

Now a court has said the Administration must stop separating families at the border. It must reunite families within 30 days, and within 14 days for children under 5. But all that hinges on the speedy release of parents now jailed. It is hard to be confident that this Administration will take the steps necessary to comply with the court’s order.

We must not forget about the urgency of immediate compliance. Dr. Fiona Danaher of Mass. General Hospital for Children wrote in the New England Journal of Medicine, “As physicians, we know that traumatic experiences like the loss of a loving caregiver can inflict toxic stress on a child, hindering healthy development and leading to changes in physiology that promote physical and mental illness throughout the life course.” Dr. Colleen Kraft, head of the American Academy of Pediatrics, called this taking of children from their parents “government-sanctioned child abuse.” Foster parents trying to care for the youngest of these children have reported that they are so anxious that they must be held all the time. They need their parents, and it is to the everlasting shame of this nation that they have been taken from them.

So, despite the onslaught of blockbuster headlines, most of which do demand our attention and action, we cannot forget these children, or their parents. We should mark every day of the court’s timetable for action with a demand to know how many children have been reunited with their parents, and how many remain apart. We must demand that the solution is not jailing parents and children together. The Trump Administration is reportedly planning on tent internment camps on military bases for indefinite incarceration of thousands of families. This would be in violation of an earlier court consent decree, known as the Flores decision, which required a limit of 20 days’ detention for families. That limit was set because of the harm to children caused by detention. In a report by the Lutheran Immigration and Refugee Service and Women’s Refugee Commissionafter investigating conditions in two large detention centers in 2007, they wrote: “Family detention cannot be carried out humanely. Conditions at the Artesia and Karnes facilities are entirely inappropriate for mothers and children. Detention traumatizes families, undermines the basic family structure, and has a devastating psycho-social impact.” But the Administration and some in Congress want to overturn the Flores ruling. So far, attempts to change the law by congressional act have failed. We must not let up the pressure to oppose family detention.

If you heard the cries of children in the audio recording taken in a detention facility, it stays with you. And should. But the explosion of women’s voices echoing in the Hart building yesterday was a powerful response. So too will be the voices raised during the Family Belong Together rallies this Saturday, June 30. There will be one at Lafayette Park in Washington at 11:00 a.m., and hundreds more all around the country. Please find one, and go.