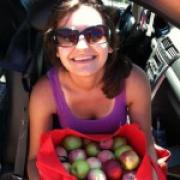 Jessica Ordon
Share This
Add your voice to the comments

This interview with Randy Reinholz (Choctaw) originally appeared on the blog Native Voices @ the Autry.

Excitement is in the room as we begin our second First Look Series workshop of the season. Described as "Blazing Saddles meets Shakespeare," Measure for Measure: A Boarding School Comedy is Native Voices founder and artistic director Randy Reinholz's adaptation of the William Shakespeare play, Measure for Measure. The original Shakespeare piece, written around 1603, deals with Catholicism's contradictions and asks serious questions about who should have moral authority. Who gets to decide right from wrong? And moreover, are the morally and spiritually righteous actually immune to the very same earthly, human impulses that get the rest of us into trouble?

Reinholz's adaptation is set in the American Old West, where the law is still in flux. Puritan Christian authority struggles to excercise control over late 19th century Genoa, Nebraska. Here, diversity and entrepreneurial opportunity flourish in form of the female-owned-and-run saloon and brothel, The Stewed Prunes Saloon. In direct contrast, however, the Indian Industrial School of Genoa strives to "Kill the Indian, Save the Man" by assimilating Native youth into the Christian belief system. A part of American history often left out of textbooks, the Indian industrial schools (or boarding schools) of the 19th to 20th centuries have been described by many as a system of cultural genocide.

The problem of cultural assimilation becomes apparent when a young Native man, Momaday, impregnates his Irish fiancee, Caitlin. The town's conservative authority figure, Angelo, refuses to recognize Momaday and Caitlin's marriage because it was done in the Indian way, rather than as a Christian ceremony. Momaday is sentenced to death for getting a white girl pregnant, and the townspeople converge to save him from an unjust fate.

Despite the depth of the ideas and themes in this adaptation, the play is outlandishly funny. As Reinholz describes it, "This issue [Indian boarding schools] rouses deep emotions even today. A play about this subject seems to want some kind of theatrical distance– so I chose comedy." Raucous, bawdy scenes of broad comedy are juxtaposed with Shakespeare's heightened poetry. Women have a stronger part to play in the resolution of this play than in the original text, too. 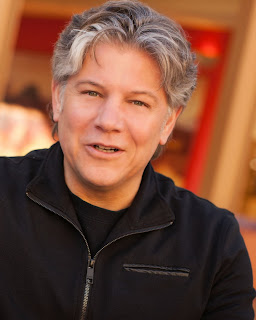 Below is a Q&A with Randy Reinholz about his adaptation and about the process of workshopping a new play.

Is this your first pass at playwriting/adapting a play? What made you decide to adapt this play, Measure for Measure, now?

As a director, I have often come up with concepts about where and when a Shakespeare text should occur. Early in my career it was about choosing a time and geographic region that would serve the aesthetics of the play. Then, with all the university work I did, it also became important that productions introduced students to the lives and values of people of various periods and regions of the world.

Through the years, I became more confident using Shakespeare's story structure and changing character motivations to redirect the audience's focus and reveal other worlds of the play. Looking at Measure for Measure– which I have always loved– I thought I could make some simple changes to the text. I wanted to shift the focus of the story to the Old West, and substitute the examination of the institution of Catholicism to the brutality of Indian boarding schools. So few Americans know of this institution, its “moral” value system and the long-term cultural damage done by people of faith. Measure for Measure is both extremely funny and potentially tragic in the way the characters both abuse power and abdicate the responsibility for true governance.
What was fun about adapting the play?

The women, they provided a depth of strength and comedy and vulnerability in the text. Shifting the focus of the action from men and women responding to conflict, to women responding to, then driving the action and eventual outcomes of the conflict was a great joy. I really look forward to hearing the text this week to see how to improve this aspect of the play. I think having a woman (Chris Anthony) direct is such a gift. She is a wonderful Shakespeare scholar and a dream in the way she works with actors.

What was challenging about adapting the play?

Deciding what to keep and what to let go of from the original text. It must be similar to what a screen writer experiences, or a filmmaker’s process in distilling a big story for the screen. 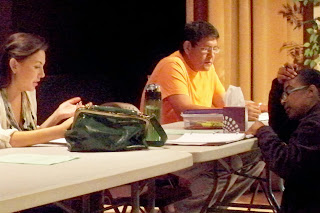 What part of the writing workshop this week are you looking forward to most?

I look forward to having the actors in the room, both making the text fly and hearing what causes them to stumble. That will be tricky – because so much of the “new” text is in heightened verse, so I have to be patient to hear if the dialogue is not working or if it just takes the actors time to unpack the language. About half the cast is familiar with heightened text, and the others will be new to the process. I have some AMAZING actors who can really lift Shakespearean text, too!