#solidarityisforwhitewomen: Who holds your hands? 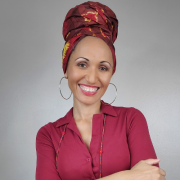 Earlier this week I watched a hashtag unfold before my eyes and saw firsthand the power social media plays in bringing people together even in the midst of controversy to create awareness and open the lines of communication. Being able to speak on a subject such as intersectionality in a way that created some dialog. All in 140 character snippets. When I saw it I thought of a personal experience I had that related to the #solidarityisforwhitewomen hashtag and wanted to share it here at MomsRising.org  with the hope that we can continue the dialog.

Fresh out of college, I got a job. It wasn't a terrible job. I kinda liked the people there. Family owned business revolving around quality control and consulting.

The owners were cool on the phone and then one day the wife came in and saw me. I'd just braided my hair up for the summer. The next day, the complaints started coming in. About how I answered the phone. My own mother would call me at the office and could not differentiate me from the other young ladies that answered the phone.

Suddenly, I couldn't really do anything right. And I started wondering if it was the way I looked. But it couldn't be, right?

The wife asked me to go to their house for a meeting. In Bay Hill, an upscale neighborhood. She spoke to me about the beginnings of their company. About how hard they both had worked and how she did all the jobs necessary to make the company succeed. I thought it was great she was sharing this with me and suspected I'd be given a permanent position with the company.

Then she mentioned how they used to have to go to secretarial school back in the day. And she suggested I attend an administrative school. Me. Who just received a bachelor's degree in Psychology from what is affectionately called the Harvard of the south (Rollins College).

The next words out of her mouth were "I heard you like to write. That's good. It will help you with the English." I had never felt like that before. That mixture of disbelief and cold anger. Did she just insinuate that I did not know how to speak the language?!

Not my first run in of this kind but certainly one that I felt was the most pronounced. I didn't take action against her though a more seasoned version of me would have brought the attention of the world to their doorstep (did I mention they did lots of business overseas?). I gave them reason to "let me go" after I ended up with a mild concussion and was out for a few days.

But that's not the point of the story. No. While in her home, I got to hear all about equality for women. All about how she had fought for a place at the table. As she was attempting to show me her superiority while showing me around her unimpressive house. If she had just taken the time to step away from her privilege she would've understood that her fight for "a place at the table" was for her own plate and no one else's. Certainly not mine.

This is what I thought about when I read the tweets for #solidarityisforwhitewomen. It reminded me of that time because it was one of the few,if not the only time in this life that I truly felt alone in the presence of another woman. I felt let down by this thing called feminism that I had studied and vehemently claimed.

The hashtag can be explained simply: a conversation was sparked by Mikki Kendall and the ramifications and responses are global.

The gist? I don't even want to give the background on Hugo Schwyzer because he deserves no attention. He was allowed to behave in ways he shouldn't have. Read up on it, I won't waste words on him here.

#SolidarityIsForWhiteWomen when the mental health & future prospects for @hugoschwyzer are more important than the damage he did.

Feminism is mainly represented by white women and that must change. With so many women of color speaking out and giving their own experiences with privilege, it's no wonder so many people are feeling uncomfortable with the conversation. I'm happy to see so many willing to sit in their discomfort as they learn, though.

Now if only white people took a seat and listened. I know it's hard, but it's something we've got to do. #solidarityisforwhitewomen

Stayed up too late reading #solidarityisforwhitewomen. Worth it though - being able to ignore racial discomfort is #privilege POC don't have

Are you watching the #solidarityisforwhitewomen hashtag? Because it's important even if it's uncomfortable. I'm listening.

Great, hard stuff coming up under hash tag #solidarityisforwhitewomen. I am listening.

It frightens me to be raising a little black girl these days. Because we are not as far along as I'd hoped. But the only way to get there is to speak. To come together with ALL women and try to find a solution. To the race issues. To the gender issues. I'm not sure where we go from here but I know it's not back behind the shade, to our spot of comfort where no one sees where we stand or what we fight for.

I think this topic might be uncomfortable for some but I applaud those who have been open to listening and not violate one of the four agreements: take nothing personal. Thank you for that. It allows us to speak in a way that lets us feel safe and heard.

Who holds your hands? Are they lifting you up or keeping you down?

It's something this woman of color has to think about because I am not privy to the privilege that would allow me to ignore the question. And it is something I hope my daughter does not have to ask.

Let's try and learn from one another. Shall we?