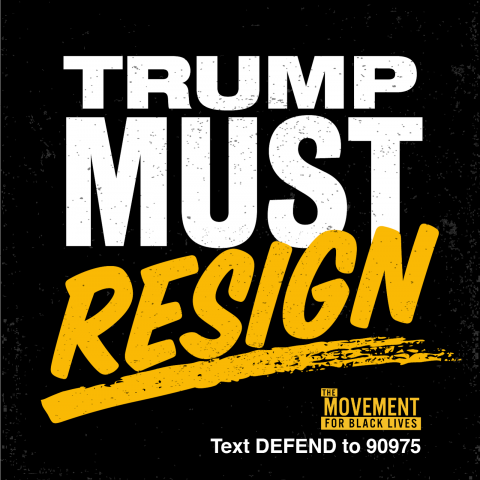 On Monday, moms across America were appalled, disheartened, aghast, stunned, unnerved, outraged, dumbfounded… (all the words!!) when law enforcement officers were ordered to deploy tear gas and shoot rubber bullets on peaceful protestors who were standing against police brutality while assembling near the White House before a curfew for President Trump. This is a violation of First Amendment rights under the U.S. Constitution, and a breach of our democracy. Then, President Trump doubled down, praising the attack on peaceful protestors, as he also went on to threaten to deploy the U.S. military to cities and states.

TAKE ACTION: *Tell President Trump to resign -- and, importantly, also call on Congress to stand up and condemn Trump’s military attack on people peacefully exercising their First Amendment rights and his threat to use military action against protesters.

MomsRising is joining the Movement for Black Lives, and dozens of other organizations, in telling President Trump to resign, so when you add your voice here, your action will help create a tsunami of change.

Why tell President Trump to resign? President Trump too must be held accountable for his part in encouraging police violence and for his threats to use military action against protesters. Not only has Trump initiated violent attacks on peaceful protesters, he has also long actively encouraged both police brutality -- such as telling police to “Please, don’t be too nice,” to the people they are arresting -- as well as condoning white supremacist violence.

It’s beyond appalling. Trump has given a green light to police and militias to beat, maim and kill people with impunity. He has now illegally activated the military to maintain power and use force on civilians. The red line has been crossed too many times. He must resign. Lives and our democracy depend on it.

So we are joining the Movement for Black Lives, and dozens of other organizations, to hold President Trump accountable. President Trump lives in his own bubble and hears only what he wants to hear. But he must be held publicly accountable for his role in encouraging police to use violence both in the past and during the current protests.

The right to protest is one of the bedrock foundations of our democracy and has led to vitally important advances throughout our history. In the United States of America, we have the right to protest, to make our voices heard, and to speak truth to power. The brutal murder of George Floyd by Minneapolis police deserves the sustained, furious national response it has generated, with people taking a stand against the horrific racism that has long pervaded our criminal justice system – and our society – and time and again takes innocent lives. This is our First Amendment right and our civic responsibility. That is why it is so alarming that President Trump brutally unleashed military and police force on people who were peacefully protesting in front of the White House and on independent media covering the demonstrations.

*Join us in telling President Trump to resign -- and, importantly, join us also in calling on Congress to stand up and condemn Trump’s military attack on people peacefully exercising their First Amendment rights and his threat to use military action against protesters.

What happened in the District of Columbia earlier this week – when heavily militarized forces used tear gas, rubber bullets and then low-flying helicopters to move and then terrorize law-abiding, peaceful protesters – was an outrage. Trump’s call for militarized armed violence against protesters was shocking in both its naked authoritarianism and its instigation of violence - and is not a direction the moms of America will allow our country to take in the future. The escalation President Trump seeks is especially dangerous in a country with more guns than people; and where gun policy, including the Second Amendment, which the President referenced earlier this week in a way that to many appeared to condone more violence, has been used as a force to advance white supremacist organizations.

America’s moms are horrified and repulsed by this President’s words and actions. For the sake of the freedoms and ideals our country has always strived to embody, and for the safety of people struggling to be heard, we must take action now.

*Don’t forget to tell President Trump to resign -- and also to tell Congress to stand up and condemn Trump’s military attack on people peacefully exercising their First Amendment rights and his threat to use military action against protesters: https://action.momsrising.org/sign/trump-resign

Thank you for helping to build a nation where everyone can thrive!

Take Action!
SIGN ON: Trump Must Resign. Congress Must Act!